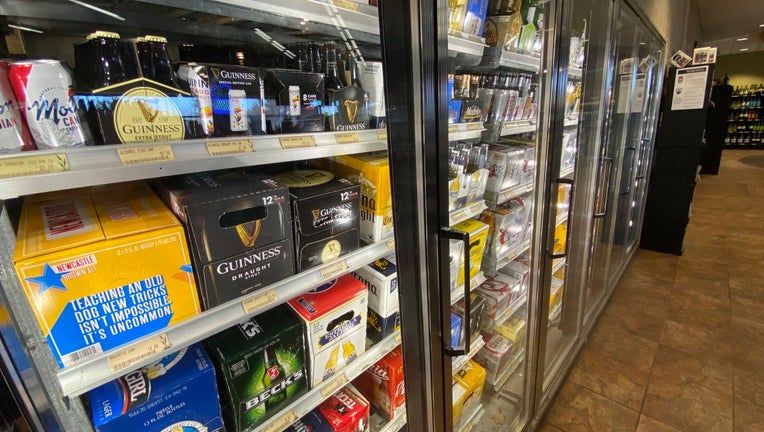 WELLS, Minn. (FOX 9) - A small town liquor store in southern Minnesota sold more than 13,000 cans of one specific brand of beer in just three days as people responded to news of the spreading coronavirus in mid-March.

According to the Minnesota Municipal Beverage Association (MMBA), the city-run stores had record-breaking sales in the last three weeks of not just beer but all liquor.

A small town liquor store in southern Minnesota sold more than 13,000 cans of one specific brand of beer in just three days, as people responded to news of the spreading coronavirus in mid-March.

“So across the state, off-sale liquor operations were going crazy with sales,” Paul Kaspszak, Executive Director of MMBA said. “Some of my members were reporting five times the sales as they would normally get.”

During St. Patrick’s week, the city-owned liquor store in Wells, Minnesota ran out of Busch Light two different times and had to be restocked by the vendor.

City Administrator, CJ Holl said a typical day’s business brings in between $1,200 to $1,500. One day during the rush, the store recorded $11,000 in sales of all different types of liquor.

“It was a perfect storm of conditions; we have a new store, St. Patrick’s week and people stocking up on more than just toilet paper,” Holl said.

The population for the city, which is northwest of Albert Lea, is 2,300.

Holl added that this week things settled down and there was plenty of Busch Light in stock.

Grocery workers weren’t the only ones to get an increase in pay amid the COVID-19 rush. Staff at Lake Liquors in Big Lake received a temporary $4 an hour raise.

The increase gave each employee almost $100 more in weekly pay, and this week the city council will consider whether to continue the increase.

Kaspszak said sales remain high, but it was especially busy in the weeks of March 16 and March 23.

In many of the stores, clerks keep hands off the products as people point bar codes towards them to scan, and credit cards are the only mode of payment being accepted. Marks on floors remind patrons to stand six feet away from others

There are 200 cities that are members of the Minnesota Municipal Beverage Association, with a total of $350 million dollars in annual sales.