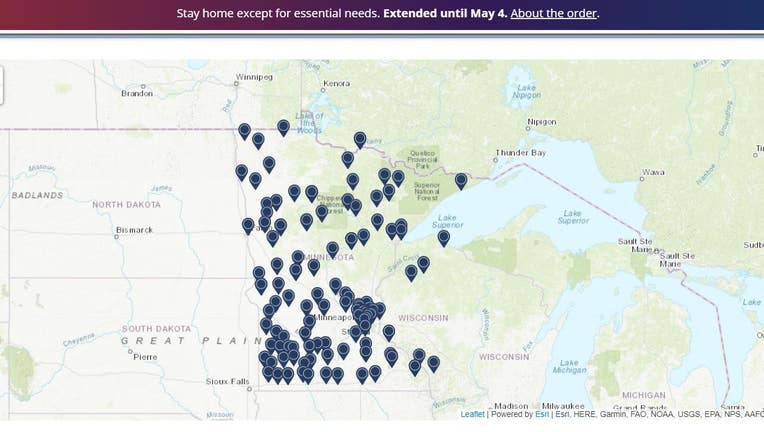 The state of Minnesota is launching a website to find the nearest COVID-19 testing location. (MN.gov)

ST. PAUL, Minn. (FOX 9) - Minnesota launched a new website directing people with coronavirus symptoms to their nearest testing center, but in many cases, the facility won't be near them at all.

The website was launched as part of the state's effort to dramatically increase testing. A newly signed contract between the state, the University of Minnesota, and Mayo Clinic promises 20,000 tests per day within three to four weeks.

As Minnesota expands COVID-19 testing, the state is launching a website for people to find testing locations.

The state now has 127 health care facilities and clinics to test symptomatic people.

Twenty of Minnesota's 87 counties don't have a testing center on the new online tracker. Asked when there will be testing available in all 87 counties, Walz said it would be a few weeks.

The testing requirements changed this week. Previously, they had been restricted to certain groups of people -- such as health care workers or nursing home residents -- who were feeling ill. Now, anyone with symptoms is supposed to be able to get tested.

$36 million contract with U of M, Mayo

The expansion was made possible under a $36 million contract with the U of M and Mayo Clinic, which FOX 9 obtained through a records request. Under the deal, both organizations will get $18 million for the ramping-up, known as "phase one" in the contract.

Once the broader testing capacity is established, "phase two" will last at least six months and promises to deliver results to all symptomatic people within 24-48 hours of their test.

Assistant health commissioner Dan Huff and budget commissioner Myron Frans told Minnesota senators Friday that the federal government would likely reimburse all or part of the $36 million for the first phase. They were unable to say how much phase two would cost.

On Friday, Minnesota reported 2,239 completed tests over a 24-hour period, the most of any day so far. But it's far from the 20,000 tests promised by next month.

Other states, following Centers for Disease Control recommendations, are looking for 14 days of declining infection rates before reopening their economies. But Walz said there was nothing magic about the 14-day period.

"We want to see numbers going down," Walz told reporters this week when asked about the issue. "We said that same question. When do you think you’re going to see 14 days of downturn here? Seriously."

Walz concerned about distance learning, but shares no plan

The governor, who on Thursday closed school buildings for the rest of the academic year, said he was concerned that distance learning was increasing the racial and economic disparities between Minnesota students.

Education Commissioner Mary Cathryn Ricker said the state would focus on "relationship-building" between students and teachers, despite the virtual setting. Yet she nor Walz offered a plan for how to immediately help rural students dealing with slow internet or parents who have raised concerns about online attendance requirements.

During Friday's news briefing, Walz broke with the straightforward information-sharing that has become the daily routine to have two students and two teachers share their experiences. The personal testimony, which was carried across the state on live TV, included a heavy dose of thanking Walz for his actions.

Distance learning will be in effect through at least June, and possibly through summer school. Walz said he was unsure what would happen in the fall.