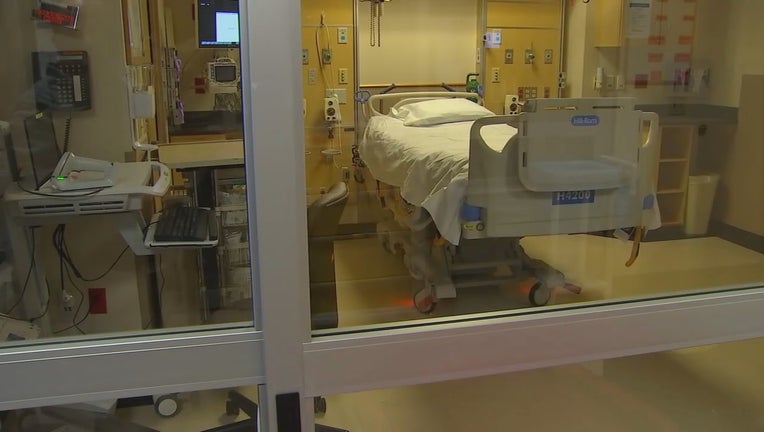 Gov. Walz says modeling shows that if no action was taken the pandemic would peak in Minnesota in early May. (FOX 9)

ST. PAUL, Minn. (FOX 9) - Armed with the first Minnesota specific model of the coronavirus spread across Minnesota, the diagnosis from Governor Tim Walz was grim, but not hopeless.

“It's too late to flatten the curve as we talked about,” said Walz bluntly, in a televised address.

Gov. Walz: Too late to flatten the curve

Armed with the first Minnesota specific model of the coronavirus spread across Minnesota, the diagnosis from Governor Tim Walz was grim, but not hopeless.

Walz blamed the setback on a lack of early testing or a coherent national strategy.

“What our objective is now, is to move the infection rate out,” said Walz.

In a split-screen slide show, Governor Walz offered two scenarios:  One without any mitigation efforts, and a second scenario with what he said was “significant, smart mitigation.”

Without any mitigation effort, the pandemic would peak in eight weeks, around May 24, Walz explained.  As many as 2.4 million Minnesotan’s would likely be infected, about 60 percent of the state, with as many as 74,000 deaths, eventually.

But without any mitigation efforts, hospital capacity would be exceeded three weeks prior, as early as May 3.  It’s estimated 66,000 people would require hospitalization (15 percent of those infected), and about 5 percent of those hospitalized would need to be in an intensive care unit (ICU) and possibly need a ventilator to help them breathe.

The state currently has only 243 ICU beds and 1,190 ventilators.  Walz said ICU care makes it ten time more likely the most critically ill would survive. He compared that scenario to what has happened in Italy.

The second scenario involves several mitigation efforts that would include a ‘stay at home’ order for two weeks (March 27 to April 10), followed by three weeks of social distancing, and physical distancing from the medically vulnerable.

Those measures would not appear to significantly change the number of people infected, but would instead change the disease trajectory, pushing the peak of the pandemic in Minnesota back by five weeks.

Under this second scenario, with mitigation efforts, hospitals would reach peak capacity around June 7, hopefully buying them time to expand bed capacity and acquire more ventilators.

The peak of the pandemic would arrive three and half months from now, around June 28th, and ultimately would still infect more than two million people in Minnesota.

“Make no mistake, slowing it is not going to stop it,” said Walz.  “It’s not going to change the reality that this is a human issue with mathematics that are driving it.”

How much the stay at home order will change the case fatality rate was unclear.

When asked in a follow-up conference call with reporters how many would die in the second scenario, Walz declined to answer.

“I don’t want to scare people,” said Walz.  He quickly added that the number would not be useful because the effect of mitigation efforts has yet to be seen and some Minnesota data is not available, yet.

The dynamic model was developed by the Minnesota Department of Health (MDH) and the University of Minnesota School of Public Health.  While it is a Minnesota specific model, Walz admitted there are some assumptions based on what has happened in other countries and U.S. cities.

Epidemiologists at the University of Minnesota continue to add state-specific data as it becomes available. The model, like the pandemic itself, is subject to change.