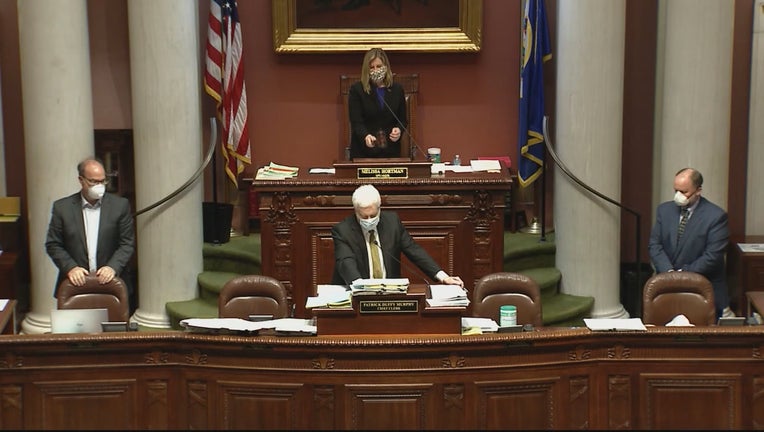 The state Legislature approved a bill that will give first responders and health care workers easier access to workers' compensation benefits. (FOX 9)

The bill, which passed unanimously in the Senate and 130-4 in the House, designates the coronavirus as a workplace illness for firefighters, EMTs, police officers, health care workers, and some child care providers.

Minnesota Governor Walz is expected to extend the stay-at-home order due to COVID-19 concerns.

For front-line workers, instead of having to prove they got the virus at work, a positive lab test or a written diagnosis from a doctor will do.

The bill could cost up to $580 million according to the state's estimates, and lawmakers passed the legislation without a deal on how to pay for it. House Democrats said they were hopeful that federal funding would ultimately backfill the workers' compensation fund.

The League of Minnesota Cities said it was "deeply concerned" about the lack of a funding source and called on lawmakers and Walz to identify one.

"As it now stands, local governments will have no choice but to pass along these costs to property taxpayers at a time when they can least afford it," said Don Reeder, a spokesman for the League of Minnesota Cities.

Lawmakers said they were unable to predict how many extra claims workers would make, because the virus peak hasn't yet hit Minnesota.

The measure had been considered in late March but ultimately shelved when the Republican-led Senate and Democrats who control the House were unable to agree. At the time, lawmakers said business representatives on the state Workers Compensation Advisory Council opposed the bill because of its costs.

Monday night, the council signed off on the legislation, clearing the way for Tuesday's legislative vote.

The bill allows employers to fight a workers' compensation claim, but only if the employer can prove the worker didn't get coronavirus on the job.

More than 20 Minnesotans from multiple industries have filed workers compensation claims because of the coronavirus, said James Honerman, a spokesman for the state Department of Labor and Industry.

The new rules kick in the day after it's signed into law. It's not retroactive, meaning it doesn't cover any workers who've already gotten the virus.