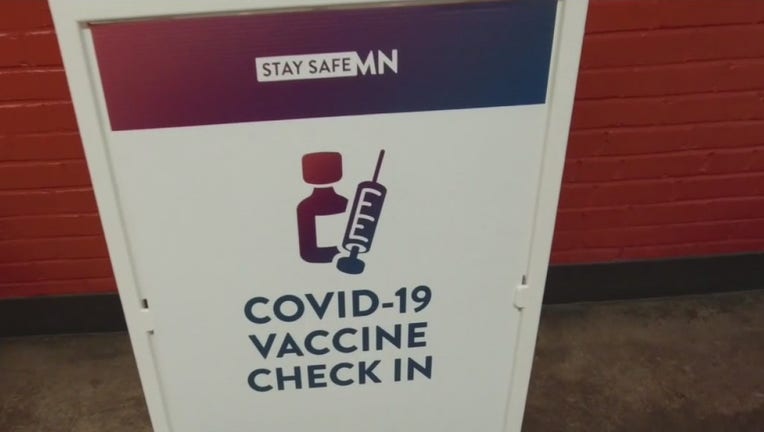 ST. PAUL, Minn. (FOX 9) - The state of Minnesota wrapped up a record-setting weekend in which it administered 70,000 vaccines on Sunday alone.

Sunday saw the most vaccines administered by the state to date, beating the 56,000 doses given out Saturday.

The state of Minnesota wrapped up a record-setting weekend in which it administered 70,000 vaccines on Sunday alone. &nbsp;

At Roy Wilkins Auditorium in St. Paul, a steady stream of Minnesotans received their first or second doses of the vaccine.

"Just excited to get things turned around and get everyone healthy again and going back to normal," said Artez Hutchinson, a preschool teacher.

Thursday, we got an idea on when more groups of people will have a shot at getting the COVID-19 vaccine.

Hutchinson received his second dose Sunday in St. Paul. He praised the state for prioritizing educators.

"The kids need consistency and normalcy and that’s the best way to grow and develop, and so I think the vaccine is huge for that," he said.

Some teachers at the St. Paul site Sunday said all of their colleagues who want the vaccine have now been given an opportunity.

"Most people, I feel like, in the last week, have gotten an email or two emails from different providers to get vaccinated," said Onya Kuznetsov Duffy, a special education teacher.

Vaccination efforts will be getting another boost as the Johnson and Johnson vaccine received an emergency use authorization, with shipments of the single dose vaccine set to be delivered by Monday.

Dr. Anthony Fauci, the nation’s foremost infectious disease expert, celebrated the news Sunday and sought to quell concerns that it is less effective than the two-dose vaccines.

While the state of Minnesota still hasn’t released allocation plans for the Johnson and Johnson vaccine, it will mean more shots in the arms of Minnesotans.