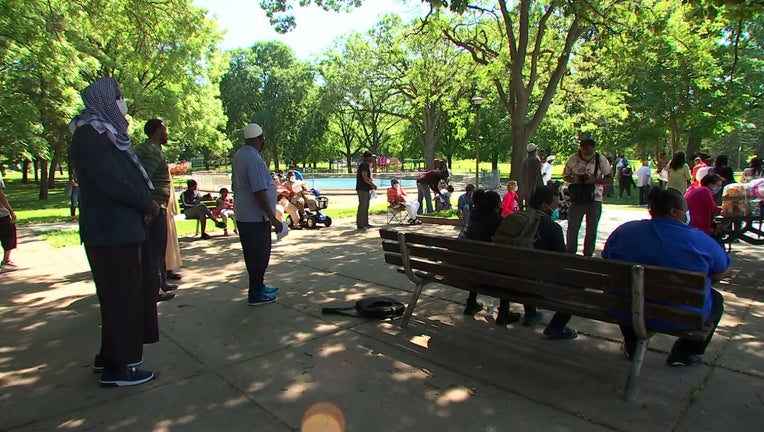 MINNEAPOLIS (FOX 9) - A week after a coalition of Minneapolis City Councilmembers gathered to call for the defunding of the city's police department, members of one community on the city's northside came together to discuss the future of police in Minneapolis.

It all comes as Minnesota continues to come to grips with the death of George Floyd at the hands of a Minneapolis police officer.

A week after a coalition of Minneapolis City Councilmembers gathered to call for the defunding of the city's police department, members of one community on the city's northside came together to discuss the future of police in Minneapolis.

Sunday, plans to bring change to the police department began to take shape at the grassroots level during the meeting at North Commons Park.

At the event, organizers made it very clear: This was not a rally or a protest, but a meeting where things would get done.

There was talking, listening, and sharing of ideas that will eventually be brought to city council.

"We can’t wait for someone else to do that," said Abdulahi Farah of the Muslim Coalition of ISAIAH. "It's our children, it's our communities, it’s going to be either you or me."

"We have a system that needs to be dismantled and it’s going to take every last one of us to unify and make that happen," added Brian Fullman of the Barbershops and Black Congregation Cooperative.

It’s not just talk. Plans for action are taking shape too.

"Protests have been extremely powerful," said Christian Ray. "They’ve gotten us to this point people expressing their hurt but now we actually have to talk about in what ways do we enter the public arena. In what ways do we tell our elected officials what we want."

Sunday's listening session workshop is kicking off what will be a series of other Sunday gatherings this month, put together by the Barbershops and Black Congregation Cooperative and the Muslim Coalition of ISAIAH.

There are times to listen and to share in smaller groups.

"We want the members of our community to run toward the police for safety, not running away because they are afraid that that may be the end when they see them," explained Tony Nwonye.

And to figure out what kind of change needs to come so those ideas can be presented clearly to city leaders.

"That’s what this is all about today is being clear about how we bring these black and brown issues to the forefront and what do we as a community want to do to exact these changes," added Ray.

There will be another listening session next Sunday at 3 p.m. at Riverside Park in Minneapolis. The goal is to take all the ideas is to the city council on July 15 and ask for a meeting.