Minnesota Supreme Court justices are deciding the fate of a lawsuit challenging whether Minneapolis has met police staffing requirements laid out in the city charter.

ST. PAUL, Minn. (FOX 9) - Minnesota Supreme Court justices are deciding the fate of a lawsuit challenging whether Minneapolis has met police staffing requirements laid out in the city charter.

The lawsuit, filed by eight north side residents, accuses Mayor Jacob Frey and the Minneapolis City Council of failing to employ a minimum of 731 officers during two years of turmoil following the police murder of George Floyd.

"Minneapolis is in a continuing crisis caused by the City Council and Mayor Frey’s failure to fund and maintain the Minneapolis force according to the city charter’s requirement," James Dickey, the attorney representing the plaintiffs, said during oral arguments.

The charter requires that the City Council fund a police force based on a ratio of officers to city residents - currently 731, based on the 2020 Census results. City officials said the council adequately funded MPD in the most recent budget and argued in court that Frey has broad discretion over hiring and operational decisions. 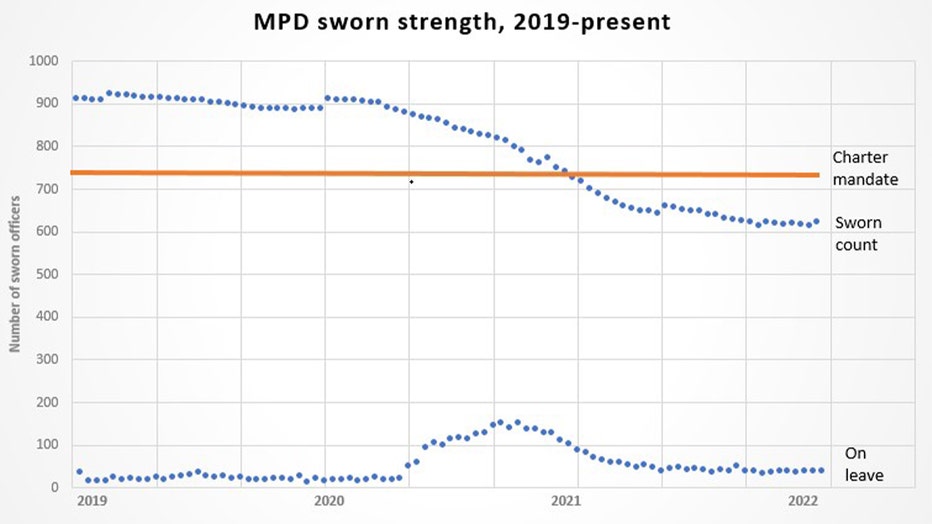 The following chart represents data from the City of Minneapolis, showing the change in MPD's sworn headcount from 2019 to present versus the level laid out in the city charter. The question that the Minnesota Supreme Court must decide: does the City

"The mayor’s power and duty to operate the police department is fundamentally discretionary," said Greg Sautter, an assistant city attorney. "Those duties include recruiting, hiring, training, and training of new police officers."

The city has lost nearly 300 officers to early retirements and duty disability claims since the start of 2020 amid Floyd's death, riots, budget cuts, and an attempt to shift the police into a newly created department of public safety that was ultimately rejected by city voters in 2021.

Minneapolis had 621 sworn officers as of May 21, according to city records provided to FOX 9. That figure is a slight improvement from the low of 614 officers earlier in the month, but down from more than 900 sworn officers in early 2020.

Justices peppered both lawyers with questions during the one-hour hearing, after which they did not provide a timeline for a decision.

Justice Paul Thissen questioned Dickey, the plaintiffs' attorney, on how much the city could reasonably do to attain a staffing level of 731 officers.

"There could be lots of other reasons that they can’t hire the officers. Like, lots of officers retiring," Thissen said.

Some are calling it an "exodus" as more officers within the Minneapolis Police Department look to take medical leave or leave the department permanently. As the staffing levels decrease, some concerned residents are filing a lawsuit against city.

"The philosophical argument you’re making seems to have been lost some time ago," he said.

The district court had ordered Minneapolis to hire enough officers by June 30 or demonstrate why it couldn't. That timeline got thrown out when the Court of Appeals reversed the lower court ruling.

If the Supreme Court agrees with the plaintiffs, it could return the case to district court, which could then set a new deadline for increased staffing.

At a news conference following oral arguments, north side resident Georgianna Yantos, one of the plaintiffs, recalled an incident last summer in which a group of young people ran through her backyard with guns before killing a man down the street.

"It’s scary. But I’ve lived there all my life in Jordan and Hawthorne, and I am not moving. The criminals have to move," Yantos said. "We need help from the mayor and from the city. Whatever it takes."