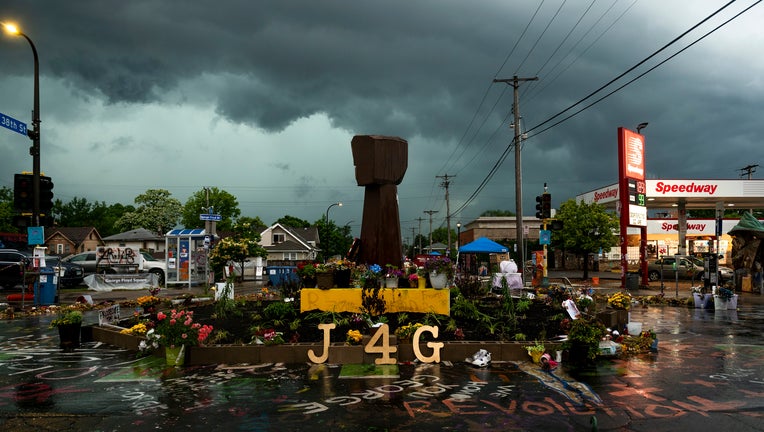 MINNEAPOLIS, MN - JUNE 18: Artwork is posted outside the Cup Foods at 38th St and Chicago Avenue on June 18, 2020 in Minneapolis, Minnesota. The intersection, dubbed "George Floyd Square", has become the site of an ongoing memorial for George Floyd, (Stephen Maturen / Getty Images)

The intersection of 38th Street and Chicago Avenue has been closed to traffic since May when Floyd was killed in front of the Cup Foods. Since his death, a makeshift memorial, including a large fist sculpture along with other art, has popped in the area.

The fist sculpture has sat in the middle of the intersection, preventing traffic in the area. But with winter coming, city officials say they need to make changes to allow for city services in the area.

Along with snow removal issues, city officials say their chief concerns are allowing access to the area for both residents, buses, and emergency services.

They are working to determine the best way to allow ways for the public to remember George Floyd and honor his life while allowing for necessary services to continue in the area.

Currently, the intersection has become an effective roundabout with a memorial in the dead center of the intersection with other tributes off to the sides and on the sidewalk. The city had hoped to reopen the area to traffic near the end of the summer but ultimately pushed back as they continued to consider options.

So far, the city has two options for the area.

The first would switch Chicago Avenue to a converging one-way street while opening 38th Street up to two-way traffic again. Under this scenario, the fist sculpture at the intersection would remain in place.

Another option would allow for two-way traffic on both streets but moves the fist sculpture to the northeast corner of the intersection. But city officials say it's possible the sculpture may need to be moved a little further away in this scenario -- with approval from community leaders and artists.

At this point, the city is still weighing options and taking feedback from the public. It's unclear when any changes would go into effect.

Any changes made under these options would, at least initially, be temporary while the city considers permanent solutions to honor George Floyd at 38th and Chicago.

Residents and members of the community can provide feedback on the city's website.