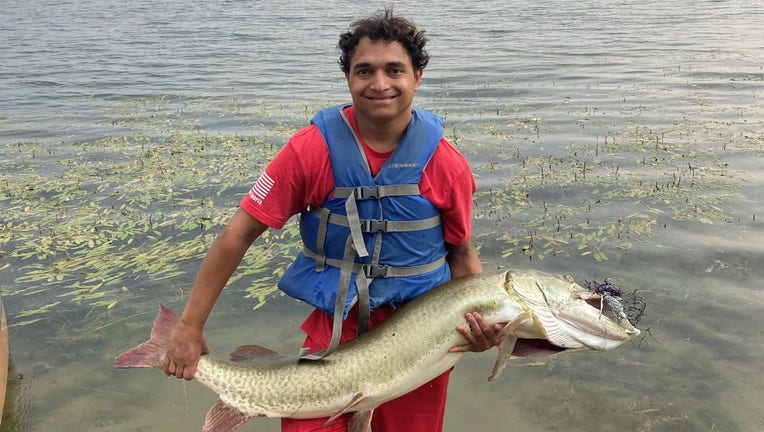 It’s about a two-block portage for 21-year-old Mikhail Pearthree and his dad to get to Bde Maka Ska. Mikhail is hooked on fishing, and you’ll find him on the lake three days a week year-round.

"You never know what you’re going to catch – could be a monster, could be a huge big fish. It’s exciting and it’s fun," he said.

And on Monday, Mikhail got a monster. After being out in his canoe for about an hour, he got a bite at about 4:30 p.m.

"I could feel it and it felt like a big fish. Once I saw it, I didn’t realize it was quite as big, but once it got closer, I realized it was big," he said.

Mikhail fought with the fish for several minutes before realizing it was too dangerous to get it into the canoe.

"The canoe almost tipped, and I paddled to shore and by the time I got to shore, it was non-responsive."

He discovered he had caught a 54.5-inch musky - something he would have normally thrown back if it wasn’t in such bad shape after the fight.

"It’s the fish of a lifetime, basically," Mikhail said.

Mikhail’s dad Craig said he was shocked by the size of the musky, but wasn’t surprised Mikhail was the one who hooked it.

"I’m not surprised by anything Mikhail does in the fishing world because he is an expert. He’s had an interest since he was a young kid and he fishes a lot, and he has a sixth sense."

Mikhail wants to be very clear he would normally never keep a fish like this - he’s a catch and release kind of guy - but under this circumstance, releasing just wasn’t an option. He says he wants to be a fishing guide one day, and it’s safe to say he’s got something to add to his resume.