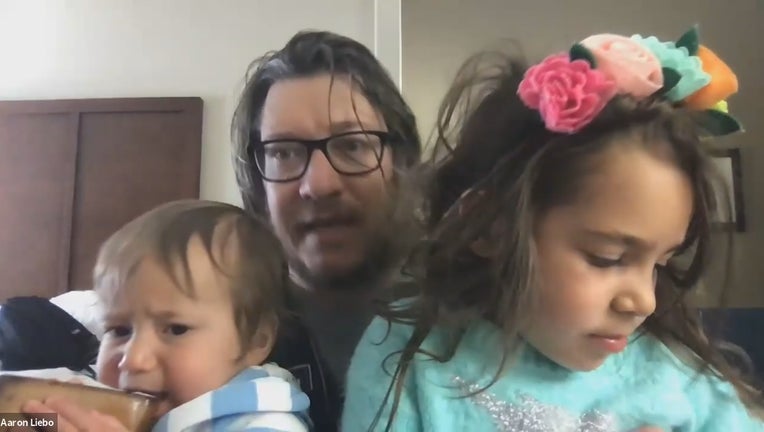 Aaron Liebo and his family are stuck in Texas amid the power outages from the winter storm. (FOX 9)

GALVESTON, Texas (FOX 9) - A Minneapolis family is among the millions experiencing the storm crisis in Texas.

Aaron Liebo and his wife Heather have been in Galveston for a family member who needs a medical procedure. The storm this week upended everything.

Minneapolis family on Texas trip gets caught in storm

A Minneapolis family is among the millions experiencing the storm crisis in Texas.

The family has been without power, has limited access to food, and up until late Wednesday, had no cell service. They were supposed to stay in an Airbnb, but as soon as the power and cell service went out the host was able to find them a hotel room.

"It’s been pretty awful," said Aaron. "The electricity is off. People are just sleeping in their cars. There are huge lines to get gas. There’s a huge water shortage. They just did send down FEMA, so we can get four bottles per person. And they have one warming center, but it’s turned out to be a COVID hotbed now too because of that."

Aaron and Heather say the ice has caused major issues for travel in the area.

"It was at least a quarter or half an inch thick, just sheeting everything even the roads," said Heather. "They don’t have salt trucks or anything to take care of it."

"Or even a shovel to clean off the steps, so we had to use a broom handle," said Aaron.

After learning the ferry in Galveston was able to start back up, the Liebos planned to take the ferry to Louisiana where they hope to find a hotel in Lafayette -- any place with heat and electricity.

This story was reported from Eden Prairie, Minnesota.