A Minneapolis high school is preparing students for a career in the food industry, and earning its creator an award in the process.

MINNEAPOLIS (FOX 9) - In a stuffy second floor classroom with no air conditioning, the heat of the ovens competes with the heat of the spices. But no one inside is complaining.

"This class is about cooking," teacher Ben Rengstorf told FOX 9.

The class at Roosevelt High School is designed for anyone who is considering a career in the food industry. But once anyone gets a taste of what these students are creating, it attracts anyone with an appetite.

"It’s also for anyone who wants to know more about food and cooking for their family or themselves for the rest of their lives," Rengstorf explained.

As short at four years ago, this course did not exist.

Rengstorf was teaching English as a second language and cut back to half-time to enroll in the culinary arts program at St. Paul College to learn about the food industry and teach about it. He worked with his leaders at Roosevelt, and started with just an introductory class.

Three years later there’s a level-two class, and a waiting list to get in.

"Parents are talking about it," Ledesma said. "We’ve had students transfer in because of this program.  So it continues to grow."

Part of the reason for the growth is Rengstorf’s enthusiasm for the class.

Hernandez is one of the students "Mr. Ben" – as his classes call him – has shepherd into the food industry. She has a received an internship this summer with OTG Management at MSP Airport where she will learn more about the restaurant business. 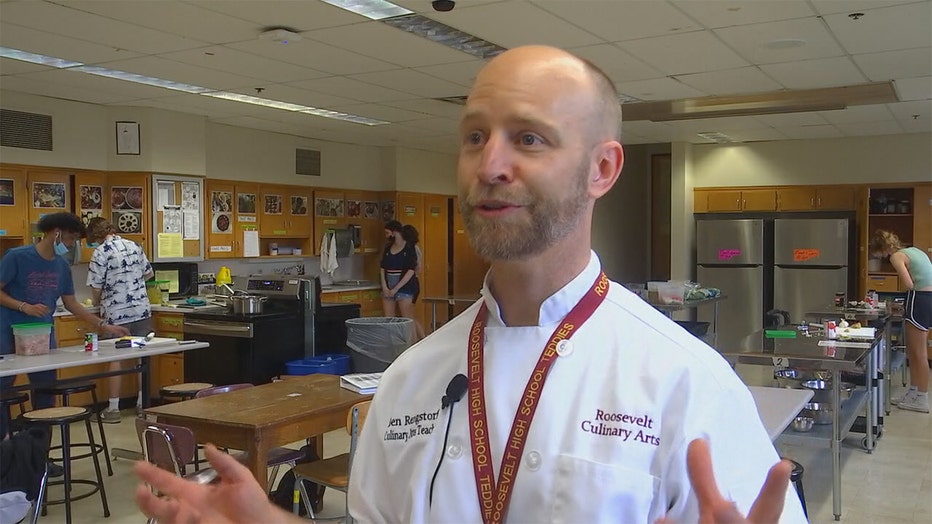 "Basically, I will be starting at the restaurant Mimosa, which is a French cuisine restaurant, and then from there take off and probably doing other restaurants inside the airport," said Hernandez.

"There are so many jobs in the food industry," said Rengstorf, who is trying to expose his students to those job possibilities. "Whether it’s restaurants or food research or something to do with food systems, there are all sorts of careers."

It’s all a big part of the reason why the National Restaurant Association’s ProStart program just named Mr. Ben as its national Teacher of The Year.
"Yeah, it’s quite an honor and very humbling," Rengstorf said.

Part of the reason why Roosevelt’s food program is such a success is because of the funding mechanism. Rengstorf created a non-profit 501c3 organization called Roosevelt Culinary Arts. He raises money for the non-profit by offering meals from the class each Friday to teachers and staff for $6 a plate. He also gets contributions from the community.

"Our budgets are so tight at Roosevelt that we had to eliminate our theater program. So it wouldn’t be right for me to ask for money in addition to my salary," Rengstorf said.

So far, it’s believed he’s the only teacher in Minnesota to create such a funding model. And it’s working for the students in giving them an appreciation for food and cooking.

"It brings us together, and I just love that," Hernandez said.

"Food is such a strong motivator and also a connector in terms of learning," Rengstorf said. "They are coming together as a learning community and getting job readiness skills and getting to eat what they learn."