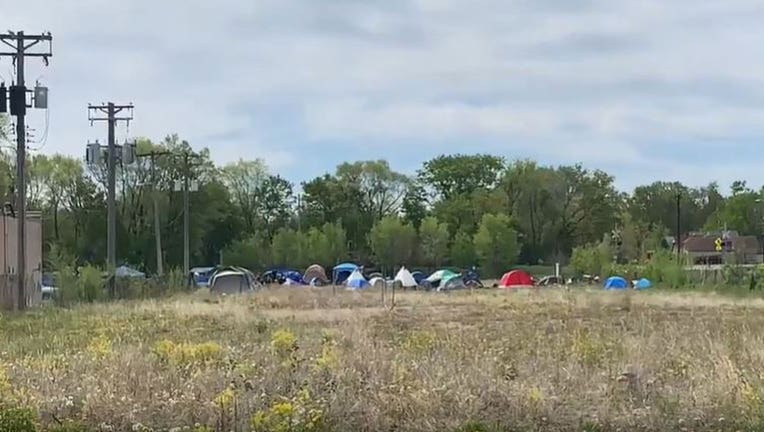 An encampment has popped up on the property of a Minneapolis church, which has some church-goers and officials worried.

MINNEAPOLIS (FOX 9) - A church in Minneapolis is searching for answers after land that it owns was recently occupied by a large homeless encampment.

"They have no place to go, but at the same time I don’t think it’s appropriate to just go and conquer private property," church chairman Andualem Emiru told FOX 9.

Minneapolis church concerned about encampment on its property

A Minneapolis church is concerned about a homeless encampment that appeared on private property.

On Friday, church members posted no trespassing signs on a fence around the property, but tents remained as of Sunday.

Neighbors on the block say the tents arrived in only a matter of hours last Wednesday.

"It was kind of a parade. I was out an hour earlier walking by and it was empty, and an hour later tents were going up and people were just kind of streaming in," neighbor John said.

"We are expecting maybe more people [are] going to show up there," church chairman Melaku Weldetsadik continued. "We called the police and they showed up and they told us that they have not enough force to remove them."

"Last Friday we talked to them friendly, and we asked them to vacate the land as soon as possible; we gave them 10 days," Weldetsadik said.

"That’s our holy place, we are going to build a church in there, so I was not happy," Emiru said.

"We really feel bad for the people, but in the meantime the neighborhood is not happy," Weldetsadik said.

In fact, some neighbors are disgusted, telling us they’ve seen drugs and sex out in the open, all just around the corner from a school.

"There’s a lot of anger among some people that just feel violated that they’re here," John said.

Business owners say some of their employees no longer feel safe coming into work either.

The church had an outdoor event planned on the land over the weekend, but that was cancelled due to the circumstances. Now church leaders are communicating with city officials in hopes of resolving the situation as soon as possible.

The city of Minneapolis sent FOX 9 the following statement Sunday:

This encampment is located on private property. The City will work with the property owner to determine how to address the encampment.

Hennepin County and non-profit partners are now operating the largest, safest shelter system we’ve ever had.  The County’s early efforts at the start of the pandemic to move persons experiencing homelessness in high-risk categories into non-congregate shelter, significant investments in shelter to allow for more spacing, cleaning, and following CDC recommended protocols and other investments have been successful in preventing large scale COVID infections in persons experiencing homelessness. We have seen an increase in encampments since the start of the pandemic as a result of the Governor’s executive order preventing local government agencies from disbanding or preventing them from forming.

The City is concerned about all encampments because they pose health and safety risks for both the people in the encampment and the surrounding neighborhood.

The City has three full-time Homeless Response Coordinators who partners with non-profit street outreach providers to visit encampments on a daily basis and connect those staying in them to shelter, housing and services.

The City’s goal is for all people to gain access to permanent housing that is safe, stable, and affordable over the long term.  Since March 2020 the City has invested $13.4 million in Minneapolis shelters and to expand street outreach services. Because of these investments, we have 200 more shelter beds, including low barrier culturally specific shelter, available today than we did last year at this time and another 36-bed facility under construction. Shelters are open 24 hours per day, 7 days a week, have COVID-19 protocols in place, and have wrap around services that help people transition out of shelter and into permanent housing.

The City continues to make investments in new permanent supportive housing, and that investment has increased by a factor of 6 in the last few years. An additional 284 units of City- and/or County-assisted affordable housing designated for people experiencing homelessness opened in 2020, and another 350 units are under construction.