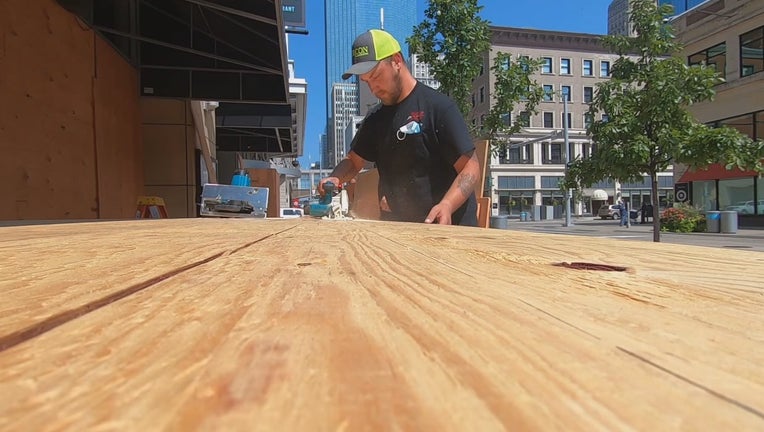 Businesses in downtown Minneapolis and Uptown boarded up windows with plywood following Wednesday's lootings and in preparation for potentially more unrest. (FOX 9)

An official count of impacted businesses is still being tabulated, but The Downtown Council expects it to be in the dozens.

Businesses in Minneapolis are assessing damage and bracing for another potential night of unrest.

Erik Forsberg, owner of Devil’s Advocate, was alerted through his security system and then watched helplessly for a short time as people entered the restaurant, tried to get in the safe and took alcohol from the cooler.

“Suddenly, they all looked at their phones and ran out the door,” said Forsberg.

Since March, Forsberg has indicated with signs on the windows that items of value had been removed from the building. Wednesday night, he and a co-worker barricaded the broken door and camped out overnight amid the unrest.

“As my chef is holding pallets up and I’m drilling them into door frame as quickly I can, people are trying to breach those and come in - a lot of people trying to come in,” said Forsberg.

“It was moving when we were all sitting in our homes, wishing there was something we could do,” said Berg. “They were here deflecting people from coming. We just want to say thank you for standing up.”

As fresh plywood goes up at all across downtown and Uptown, Forsberg says between the pandemic, the coming winter and unrest, reopening maybe not happen until spring.

“I think we all know in our heart of hearts we have a long road ahead of us with trials, other incidents,” said Forsberg. “Yesterday was an incident of misinformation. So if something like that can happen because of bad information that got sent, imagine if something does actually happen again - it’s going to be awful.”