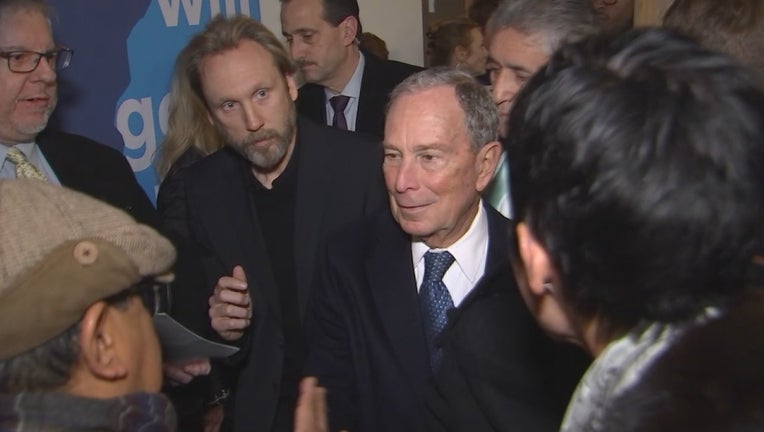 Mike Bloomberg moves through his supporters and members of the media during Thursday's office opening.

MINNEAPOLIS (FOX 9) - Former New York City mayor, businessman, and 2020 presidential candidate Mike Bloomberg made his second stop in Minnesota, as he makes a push following his late entry into the Democratic primary.

Bloomberg was in Minneapolis Thursday afternoon to open his first campaign field office in the state.

Former New York City mayor, businessman, and 2020 presidential candidate Mike Bloomberg made his second stop in Minnesota, as he makes a strong push following his late entry into the Democratic primary.

Speaking to supporters at the opening of his first campaign office in Minnesota, Bloomberg touting himself as the "Un-Trump."

"He tweets," Bloomberg said. "I follow facts, respect data, and tell the truth. He looks out for people who inherited their wealth. I'm self-made."

Bloomberg told the crowd he plans on opening eight offices in the state and hiring 30 to 40 people dedicated to helping him replace Donald Trump in the White House.

Before arriving in Minnesota, Bloomberg said if he were elected president, he would support protecting the Boundary Waters from a proposed Twin Metals copper mine nearby.

"I think it's a terrible idea," said Bloomberg. "It's something that's so destructible to the environment of a place that's so pristine and unique. I can't imagine why anyone would even think of it much less a government approving it."

While in town, Bloomberg also met with Kenya McKnight-Ahad who runs the Black Women's Wealth Alliance, an organization which helps women of color find financial stability.

"I like his good business economic leadership sense," said McKnight-Ahad. "He doesn't have the cleanest track record but he does have a solid one. That's enough for me to get behind."

Bloomberg admits it will be an uphill battle winning votes in fellow Democratic presidential candidate Amy Klobuchar's home state but he believes he can do well enough on Super Tuesday to continue his presidential aspirations.

"I couldn't have had a better reception and I would love it everyone voted for me," he said. "If you don't vote for Amy, vote for me."

Bloomberg said if he doesn't get the Democratic nomination, he wouldn't run as an independent because he would never win the electoral college. After Thursday’s stop, his campaign said Bloomberg is headed back home to New York City.