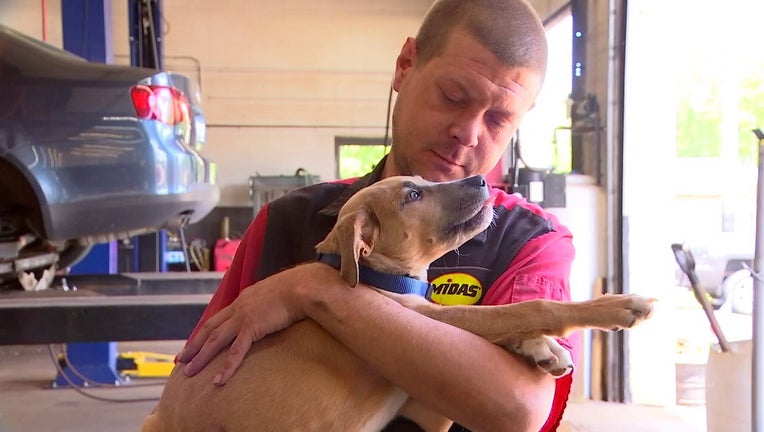 RJ became a hero this week after rescuing a dog from the dumpster. (FOX 9)

SHAKOPEE, Minn. (FOX 9) - A life-saving rescue played out at a Shakopee auto shop this week after someone tossed their dog away in a dumpster.

A mechanic at the Midas auto shop who was lucky enough to spot something moving in the dumpster and rescued the poor pet – who he has now brought home.

A chance encounter and quick thinking led to a dog that was left in a dumpster being saved, and new love formed in the process.

"All I could hear was this... [makes knocking sound] and then I was like, okay maybe a raccoon," recalled R.J., the mechanic.

Inside the empty dumpster was a backpack. It was moving but not making a sound.

"I opened it up and the dog literally like slowly lifted its head and looked up, and I didn’t even know what to say I just about started crying there," said R.J.

Someone had dumped him and left him abandoned in a hot zipped-up backpack. Luckily, the dog was left after trash pickup but just in time for R.J. to come to the rescue and fall in love.

As for the person who threw away the pup, we may never know who it was. The only thing inside the backpack beside the little guy was a fake grill and a couple of baggies. "He’s doing a lot better than he was, he’s not shaking no more he’s calmed down a lot."

"Of course, I got to give a name when you bring him to the vet, and so I figured if anything he’ll be my little trash panda Midas," said R.J.

R.J. does say if by chance Midas was stolen, and he belongs to someone, he’s willing to give him back. But there will need to be some hard proof. Shakopee Police took a report on the case and remind everyone there are a number of humane ways to surrender a dog but throwing them in a dumpster isn’t one of them.