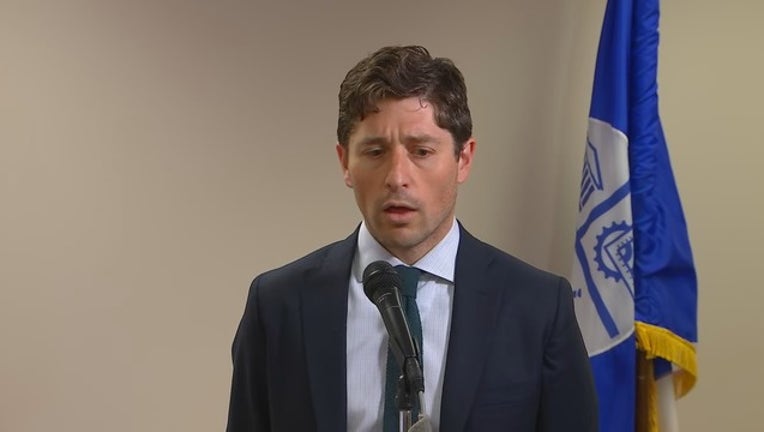 MINNEAPOLIS (FOX 9) - Minneapolis Mayor Jacob Frey and the Police Officers Federation disagree on a reported agreement between the Police Chief and the Federation made Thursday.

Friday morning, Minneapolis Mayor Jacob Frey held a press conference where he reaffirmed his previously stated ban on “fear-based” training for police officers. There, he added that all trainings will be reviewed by the police chief before being made available to officers.

Frey said the city’s relationship with a training program called Law Officer will continue, but under close monitoring of the city’s Police Chief Medaria Arradondo.

The Police Officers Federation release went on to say that it "worked with the Chief on what we believed was a workable agreement," and opened the door to further discussion on the matter.

In his Friday press conference, Frey asserted that the trainings available to officers through Law Officer will be reviewed ahead of time by Arradondo before his officers participate in them.

He reiterated that the department still bans “fear-based” training, which is a determination that will be made by Chief Arradondo and his deputy chiefs.

“Our police department will be granted full access to those trainings,” Frey said Friday morning. “They will review them, they’ll make a determination and that determination will be respected.”

Frey first announced the ban on “fear-based” or warrior-style training in his State of the City address last week.

This week, the head of the Minneapolis Police union defied the ban and the director of training for Law Officer, Travis Yates, published a video encouraging Minneapolis officers to “stay in the fight.”

In a release Friday afternoon, the Police Officers Federation outlined their understanding of the agreement it made with Arradondo.

"The POFM did meet with Chief Arradondo yesterday in the spirit of cooperation and the goal of addressing the issues surrounding Mayor Frey's new policy about MPD training," the release said.

The Federation said they agreed to create an "administrative account" that would allow MPD's training unit to vet the training that is being offered through Law Officer.

The Federation also said they agreed the city would "suspend any discipline related to taking training during off duty time until the policy was revised." The union vehemently disagreed with any restrictions on officers during off duty time and said it would continue to discuss the situation with Arradondo.

An invitation was also extended to the City Council, the Mayor and other stakeholders to participate in one of the "fear-based" trainings.

Finally, the Federation said it agreed there would be no media coverage and a non-disclosure agreement regarding the agreement.