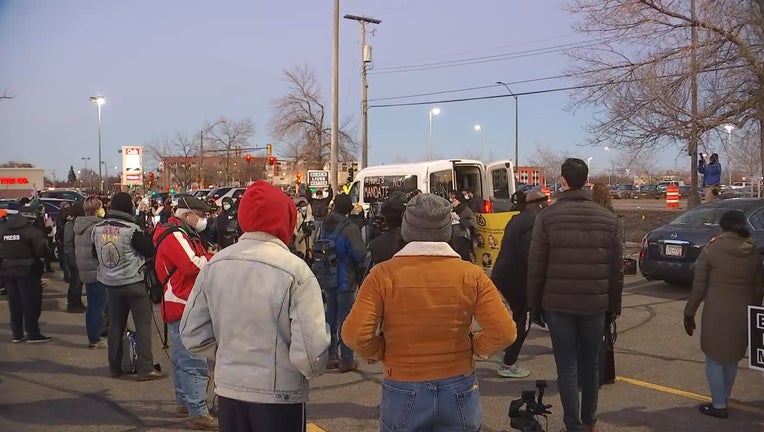 A rally was held outside police offices in St. Paul on Friday. (FOX 9)

ST. PAUL, Minn. (FOX 9) - Protesters took to the streets of St. Paul, calling for charges to be filed against the former police officer who shot an unarmed man last weekend.

Protesters took to the streets of St. Paul, calling for charges to be filed against the former police officer who shot an unarmed man last weekend.

"What we’re here to talk about today is justice and continued police brutality, terrorization, and assault that goes on in Saint Paul," said community activist Toussaint Morrison.

The group of several dozen is angry over last weekend’s police shooting of 31-year-old Joseph Washington -- a naked, unarmed suspect who was on the run after allegedly assaulting his ex-girlfriend and streaming the attack on social media.

But protesters argue that’s not enough. They want Officer Dean prosecuted criminally, pointing out the video shows a K-9 officer biting Washington at about the same time the shots ring out.

"They say they are fighting crime, but they are causing the crimes, causing the terror in the community," said Toshira Garraway Allen with Families Supporting Families Against Police Violence. "They sicced a dog on a naked man."

While the demonstration marched down University Avenue towards the Capitol, others in the community raced to the defense of Officer Dean.

"We are now in cancel culture and people are being tried by social media and social media mob mentality," argued Lindsay Ferris Martin.

Lindsay Ferris Martin is a Saint Paul resident, working to build community relations with the department. She explained she has gotten to know Dean, a six-year officer and former Marine, through several events including the Christmas-time "Shop with a Cop" program.

Ferris Martin believes Dean deserved a fair and thorough investigation into the entirety of the call -- and not what’s seen on 42 seconds of body camera footage.

"I can’t even imagine what it’s like to put on a badge anymore and go to work and know your whole life could be over in doing your job, protecting your community, answering the call no one wants to go to," she said.

Joseph Washington survived the shooting, he is still recovering over at Regions Hospital and has been charged with the earlier attack upon his ex-girlfriend.

Meanwhile, the attorney general and a Washington County prosecutor promised to review the police shooting in determining whether Officer Dean should face charges as well.