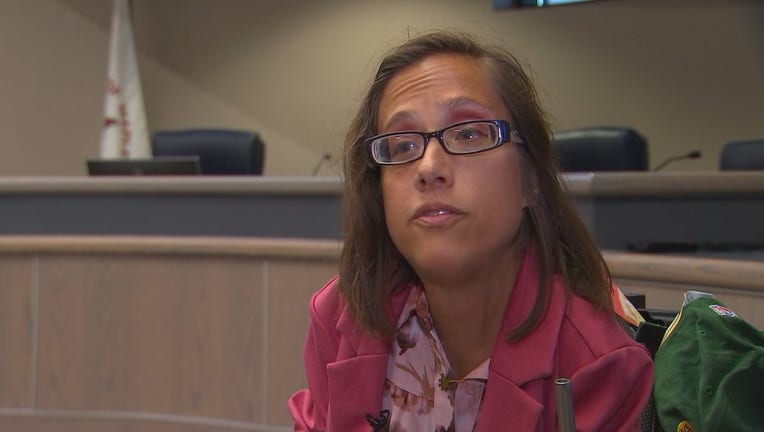 Nikki Villavicencio was sworn in as a Maplewood city council in January. This month, due to the pandemic, she attended her first in-person meeting since be elected.

MAPLEWOOD, Minn. (FOX 9) - She’s lobbied the halls of the Minnesota state Capitol for years, and now, a top disability advocate is swapping roles as one of a small number of Minnesota politicians who lives with a physical disability.

Nikki Villavicencio was sworn in as a Maplewood city council in January. This month, due to the pandemic, she attended her first in-person meeting since being elected.

"Its been a challenging transition, but it’s a transition I’ve really enjoyed," she said.

For more than a decade, Villavicencio has been known at the Minnesota Capitol as one of the top disability advocates in the state. Before the pandemic, she and her partner Darrell could be spotted in the halls of the legislative office building several days a week, often with their young daughter in tow.

"I went from being on the outside kind of screaming in, to the inside speaking out," she said of her transition to politician.

She is not only the only member of the Maplewood city council living with a physical disability, she is also the only one who doesn’t drive, the only parent of a young child, the only renter, and - to the best of her knowledge - the only one who lives below the poverty line.

"If I make the community work for people that look like me and are like me, its going to work for a lot more people," she said. "The young mothers, the seniors, the families that don’t have a car."

Villavicencio says her full time job remains advocacy, as the city council is a part-time position. This legislative session, she helped pass legislation that will help parents living with disabilities.

On the local level, her focus is broader yet still focused on equality.

"It’s the streets, it’s the garbage, it’s the bump in the road, it's the ‘why did they put that parking lot over there instead of over here,’" she shares. "Before I ran for office, I never thought that I’d be able to make decisions about housing - which is really awesome to me."

She says she doesn’t know what the future of her political career holds, but she is just happy being a city council member.

"I could see myself being a city council member for a long time because I really enjoy it, and I see how I could have a lasting effect."