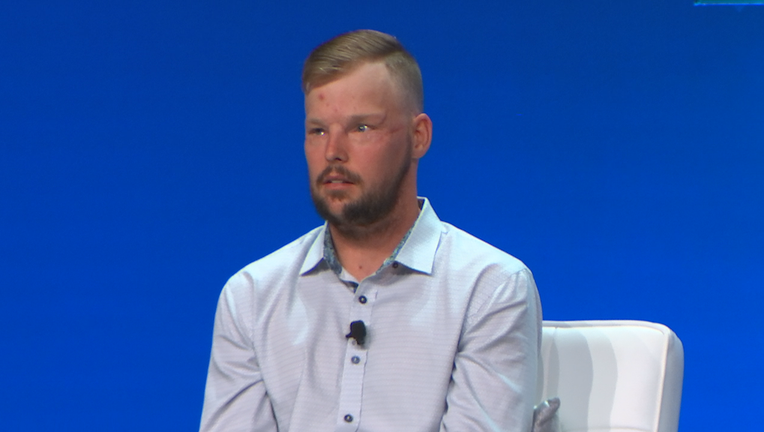 The recipient of a facial transplant after a suicide attempt, this man is now speaking out about depression and mental health.

ROCHESTER, Minn. (FOX 9) - A suicide attempt, facial reconstruction and ultimately a facial transplant is a journey most will never know, but a 32-year-old Minnesotan is hoping that his story will help others who might be struggling.

A suicide attempt, facial reconstruction and ultimately a facial transplant is a journey most will never know, but a 32-year-old Minnesotan is hoping that his story will help others who might be struggling.

“I just plan on continuing my life and living it the best I can and helping people along the way,” said Sandness.

He is doing just that by sharing his journey from his suicide attempt, to living life after the transplant in 2016. It was a path that was far from easy and that he wasn’t sure he wanted to do.

“You really feel you hit rock bottom at that time, but then you realize, after I’ve survived what I’ve been through, that that wasn’t nearly as bad as what I had coming,” he said.

After he survived the attempt, he had to go through 10 years of having virtually no face. He had a prosthetic nose and lips while he prepared for the transplant. He said going out in public was brutal and he would receive heartless looks.

“I wasn’t in it for the looks, for aesthetics,” he said. “I was in it for function. I wanted function more than anything.”

He said he yearned for lips, teeth and a nose that actually worked.

No matter where he was in the journey, the depression didn’t go away. He lives with it, but now has a team to support him.

“If you ever feel yourself turning in and feeling like you can’t think of a way to get better, to get help, take that as a sign of depression. If you have thoughts of suicide, don’t think of that as not important. That’s important,” Sandness said.

With help, Sandness is managing his depression and talking to people about it. He also tells people to embrace the past no matter what it is, so you can have a future.

“I look in the mirror now and I’m not who I used to be,” Sandness said. “I’m not the person in between after the gunshot. I’m Andy right now.”

So far, other facial transplants have only lasted about 10 years, but Sandness’ team at the Mayo Clinic is hoping they can make his last much longer.