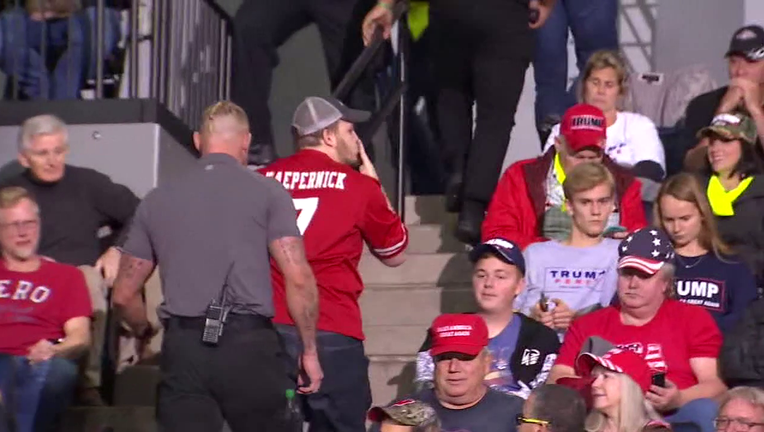 The man appeared to blow kisses to President Trump supporters in the crowd as he was removed.

MINNEAPOLIS (FOX 9) - Less than an hour before President Trump was set to take the stage at the Target Center in Minneapolis, security members were already removing people from the crowd.

FOX 9 cameras captured the moments as a man wearing a Colin Kaepernick jersey was removed from the audience and presumably kicked out of the rally. It's unclear was led to the man being escorted from the Target Center. But, as he left, he appeared to be blowing kisses to the crowd.

A man wearing a Colin Kaepernick jersey was escorted out of the Target Center about an hour before President Donald Trump took the stage.

Kaepernick, a former quarterback for the San Francisco 49ers, became a divisive figure in 2016 for his pregame protests in which he would kneel during the National Anthem before games.

The former quarterback has been unable to land another job in the NFL since ending his contract with San Francisco in 2017. Some have criticized NFL teams for blackballing Kaepernick from the league for his protests. Last year, the NFL reached a settlement with Kaepernick over a lawsuit where he accused of teams.

President Trump is scheduled to take the stage around 7 p.m. for his rally at the Target Center. You can watch it live on FOX 9's website.