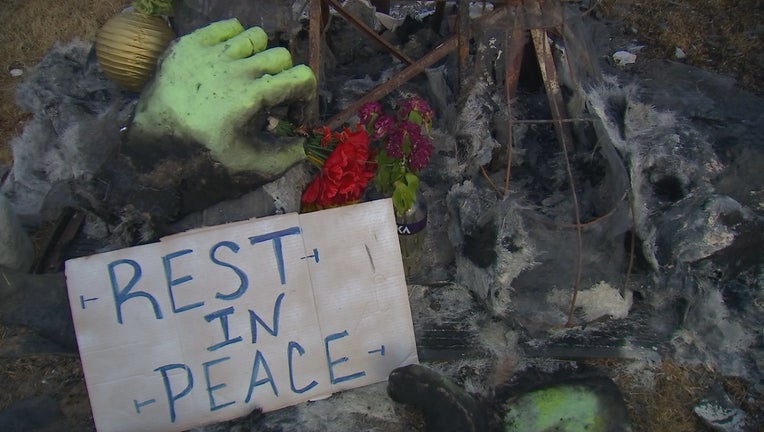 Burned remains are all that is left behind after a well-known Frankenstein statue was set on fire in Janesville, Minn. (FOX 9)

JANESVILLE, Minn. (FOX 9) - For residents in Janesville, a more than 20-foot Frankenstein sculpture located in the city’s downtown was a community staple.

"This town used to have a doll in a window as its own identity but now it’s Frankenstein," said Mark Schultz, a long-time resident.

Schultz said it’s one of the more photographed locations in the small town of roughly 2,500 residents. "People come from all over the world to look at Frankenstein and during Halloween," added Schultz.

The sculpture has made its rounds across the state and first appeared at the Saint Paul Winter Carnival in the Vulcan parade in 1988. But now ashes, wires, and memories are what’s left after it was burned down.

Mark Borneke and his wife, Vicki, got a call in the middle of the night while on vacation that the artwork he purchased nearly 10 years ago in Saint Paul was engulfed in flames.

A 35-year man has been charged with two felony counts, including second-degree arson and first-degree damage to property.

Janesville police say surveillance footage obtained from a nearby business shows the suspect attempting to light the statue on fire twice before ultimately succeeding.  Police arrested him on probable cause after his wallet was found near the scene.

Borneke said there has been an outpour of support from the community, including discussions of a GoFundMe as the statue, which will cost at least $14,000 to repair.

He says the sculpture is one-of-a-kind and while he wants to put it back up, he has to find the artist’s son as he’s the only one with the original design sketch.