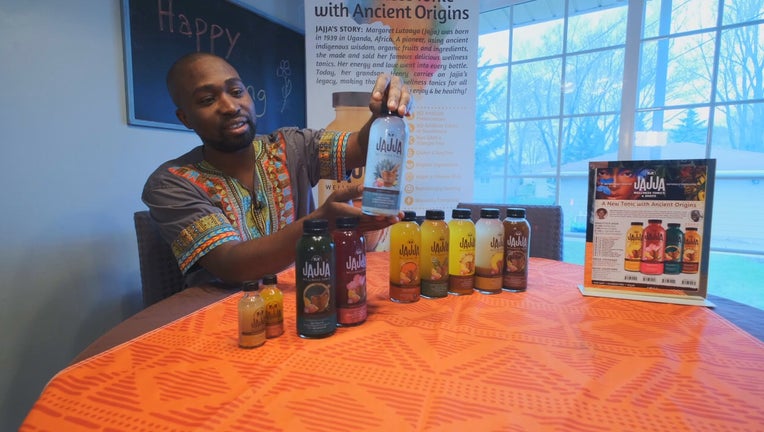 WEST ST. PAUL, Minn. (FOX 9) - Even though Uganda is half a world away, Henry Kisitu is bringing a taste of Africa to Minnesota.

"This has been passed on by my grandma to us and now I'm trying to expand it from Africa to here," said Kisitu.

Even though Uganda is half a world away, Henry Kisitu is bringing a taste of Africa to Minnesota.

After losing his parents by the time he was three years old, Kisitu grew up helping his grandmother "Jajja" Margaret Lutaaya make and sell indigenous African tonics in her kitchen in his native country.

He continued that tradition when he got a scholarship to go to the University of St. Thomas where he met his wife Alexandra. It wasn't until his grandmother died in 2016 that he decided to honor her by sharing her recipes through his startup company Jajja Wellness.

"I wish more people would have known who she was," said Kisitu. "She knew a lot about medicine that people are talking about now."

Kisitu uses traditional African ingredients, like his grandmother did, in eight flavors of juice drinks that he says offer different health benefits. He sells them at farmers markets and co-ops around the Twin Cities where he says he enjoys watching people's reactions.

"We have pineapple and ginger. We have turmeric. We have hibiscus. We have baobab. These are things we grew up incorporating in our foods," he said.

"I want my grandma's legacy to go on, but also I want people to try new things," said Kisitu. "If you don't have 18 hours to travel to Uganda, here is something that tastes like East Africa or Uganda."