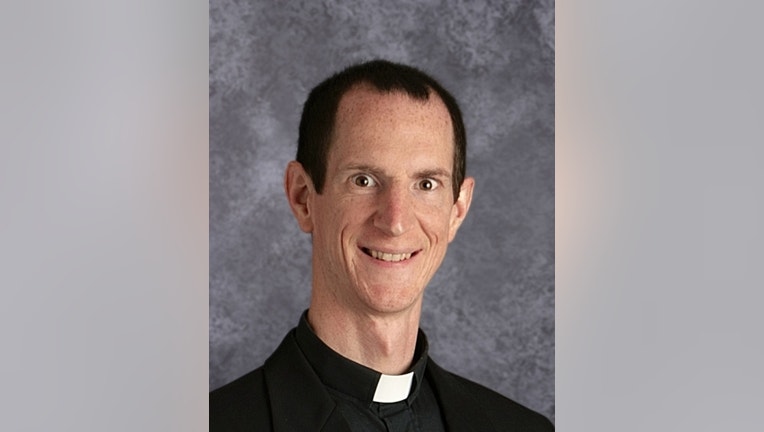 This Lonsdale, Minn. priest apologized for his comments he made about Muslims during a Sunday homily in January. (Church of the Immaculate Conception)

LONSDALE, Minn. (FOX 9) - A Minnesota priest has apologized for comments he made about the Muslim faith during a service in Lonsdale.

Wednesday it was calm and quiet outside of the Church of the Immaculate Conception in Lonsdale, but what happened inside the doors during a recent Sunday homily has some people incredibly upset.

Lonsdale priest apologizes for anti-Muslim remarks made during homily

A Minnesota priest has apologized for comments he made about the Muslim faith during a service in Lonsdale.

Jaylani Hussein, executive director of CAIR-Minnesota, spoke out after audio of that Sunday sermon was shared on a blog and picked up steam online.

The priest’s comments about Muslims were the focal point.

“More specifically, we should not allow large numbers of Muslims asylum or immigration into our country,” said Fr. Nick VanDenBroeke in the recording. “Islam is the greatest threat in the world to both Christianity and to America.”

VanDenBroeke is the pastor at the church and made the remarks Jan. 5. That day was observed as “Immigration Day” by Minnesota bishops.

While the homily started off with an inclusive message, it took a turn against the Islamic faith about 10 minutes in.

“Of course, there are peaceful Muslims, absolutely,” he added. “But the religion as a religion and as an ideology and worldview, it is contrary to Christ and America.”

Others see those words as a big step back in building interfaith relationships.

“I think there are real consequences to these types of behavior and I hope someone who listened to that does not become more radicalized where they see Muslims as a threat and they become a threat to Muslims,” said Hussein.

My homily on immigration contained words that were hurtful to Muslims. I’m sorry for this. I realize now that my comments were not fully reflective of the Catholic Church’s teaching on Islam.

Here are the remarks for which VanDenBroeke apologized:

Both as Americans and Christians we do not need to pretend that everyone who seeks entry into America should be treated the same. I believe it’s essential to consider the religion and world view of immigrants or refugees more specifically we should not allow large numbers of Muslims asylum or immigration into our country.

Islam is the greatest threat in the world both to Christianity and to America – of course there are peaceful Muslims, absolutely, but the religion as a religion and as an ideology and world view it is contrary to Christ and America.

I am not saying we hate Muslims, I am absolutely not saying that, they are people created out of love by God just as each one of us is. But while we certainly don’t hate them as people we must oppose their religion and world view.

And if we want to protect our great country, not only as a Christian nation but also as the land of the free then we must oppose the immigration of Muslims, that’s an example of keeping bad ideas out of the country that we have the right to do as a sovereign nation.

I’m simply a realist to acknowledge that fact, they are the greatest threat to Christianity and America and we need to recognize that fact and our laws of immigration need to reflect that.