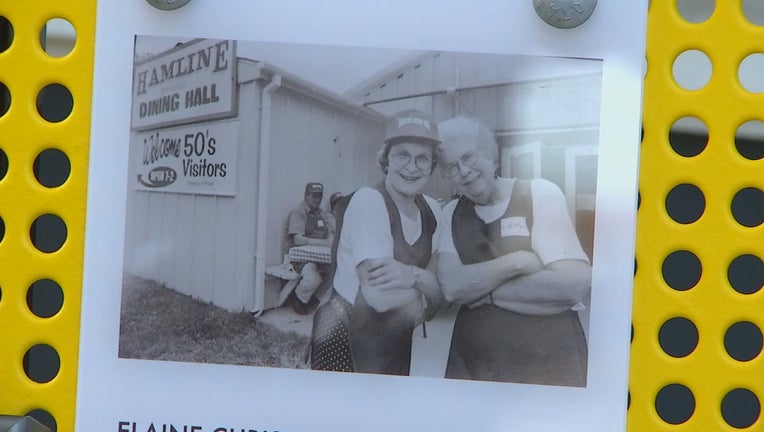 Elaine and Betty, who were both longtime volunteers at the Hamline Dining Hall, received their very own bench at the Minnesota State Fair (FOX 9)

FALCON HEIGHTS, Minn. (FOX 9) - The Hamline Dining Hall at the Minnesota State Fair is honoring one of its longtime volunteers as a way to say thanks for decades of hard work.

“When you think the Fair, you think Elaine Christiansen,” said Shana Zaiser, the development director at the Minnesota State Fair.

A longtime Minnesota State Fair volunteer got honored and surprised on Thursday...

Elaine has had so many roles, so many titles and so many honors - there are too many to count.

“I just know she’s been around a long time,” said Teresa Renneke, a volunteer at the dining hall.

In 1950, Elaine was crowned 4-H Vegetable Queen - the photo of which hangs in the State Fair Museum. It’s said that she even has her own parking spot on the fairgrounds. Now, along with her old pal Betty, she’ll have her very own bench.

“There couldn’t be a more appropriate remembrance for the hours we’ve spent on the State Fair,” said Elaine.

Her friends at the Hamline Methodist Dining Hall came together Thursday to surprise her with somewhat of a 90th birthday gift to commemorate two ladies who spent 25 to 30 years volunteering at the popular fair food stop.

“To give it to Elaine, someone who gives joy to so many people, she’s one of those people who lights up a room whenever she’s there,” said Zaiser.

While Betty is no longer alive, Elaine shares the honor gracefully. Their names are now etched next to each other for decades to come.

“What did Betty mean to me? Just about everything. Best friend, Best co-worker. She had this wonderful sense of humor, she was just a little bit irascible at times,” said Elaine.

Unlike most State Fair benches that get picked up and moved around, this one will stay right at the dining hall where Elaine and Betty belong.

“I’ve had a remarkable 90 years and to have this happen really is a pinnacle of those 90 years,” said Elaine.