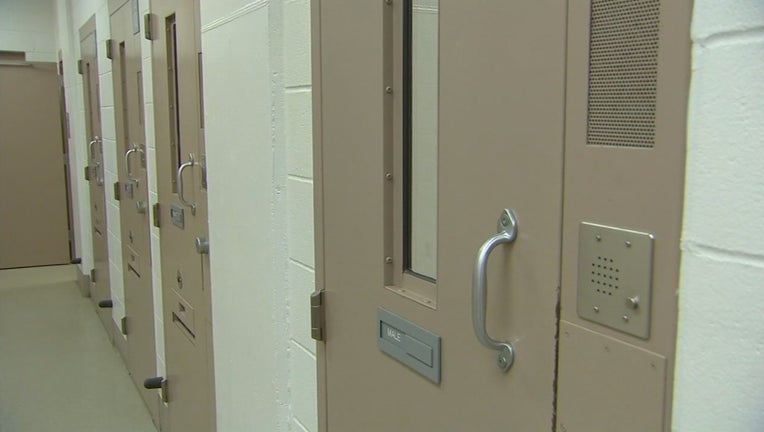 An inside look of the Hennepin County Jail. (FOX 9)

MINNEAPOLIS (FOX 9) - When it comes to jails and preventing the spread of COVID-19 pandemic, the word many in law enforcement are using right now is "balance."

“We’re balancing one danger of the virus to another danger of taking violent criminals off the streets,” said Hennepin County Sheriff David Hutchinson.

Minnesota officials outline plan to keep COVID-19 out of prisons

Minnesota officials outline the plan to keep COVID-19 out of prisons.

Sheriff Hutchinson says part of that balance is releasing nearly half of the current jail population. Usually the Hennepin County Jail population is around 800 people. As of Tuesday morning it was 456, according to a spokesperson for the sheriff’s department. The Ramsey County Jail has also reduced its inmate population by nearly half.

“These are people that we assume and hope through investigations and through the court process that they’re not dangerous,” said Hutchinson.

He says for the most part, inmates who have been released were being held for non-violent misdemeanors or low-level, non-violent felonies. Typically, those who are committing those types of crimes right now aren’t being arrested and taken to jail right away. Many departments across the state are following similar guidelines.

“Patrol deputies and law enforcement, we’ve asked them to be a bit judicious on who they bring in here,” said Commander David Pacholl of the Anoka County Sheriff’s Office.

Instead, those people would be cited by the officer and given a summons to make their first appearance in court on a later day. Commander Pacholl explains when people are brought to jail, they first go through a screening, and precautions are taken as they are officially booked.

Last week, an inmate at Hennepin County Jail tested positive for COVID-19. Admissions staff noticed he had possible symptoms during their screening process and isolated him after intake.

“We do have extensive education we put out for the people incarcerated,” he said. “They’re given cleansing materials. We are practicing social distancing within the jail, we are keeping new people coming in separate from people who have been here.”

Commander Pacholl says the Anoka County Jail does have space to isolate an inmate. He says it was originally put there to deal with inmates who may have tuberculosis.

Both Commander Pacholl and Sheriff Hutchinson say jails have long had plans in place to deal with infectious viruses and diseases, but the scale of the COVID-19 has forced them to create new plans and procedures.

Regardless if someone is taken to jail for an alleged crime or not, they will end up dealing with the court system, which is also changing some of their guidelines.

“This is not like business as usual of six weeks ago,” said Hennepin County Attorney Mike Freeman.

Freeman explains courts are doing away with bail for some non-violent crimes and are utilizing options, like electronic monitoring bracelets. He says the changes don’t impact if a person will actually be convicted of a crime or not.

“We have not changed our standards on who we charge and what we have,” said Freeman. “If there’s evidence to charge a person, we’re still doing that.”

He says the courts weigh a person’s criminal history and the likelihood of them committing a crime again when deciding if they should be let out until their next court date.

“This is people,” said Freeman. “This is not magic, this is not science, but I think we’ve done a pretty good job… No one around here is handing out get out of jail free cards.”

Both law enforcement and prosecutors say it’s really a case-by-case basis as they try to keep the balance.

“Our goal is to keep people safe from the virus and dangerous criminals as well,” said Sheriff Hutchinson.