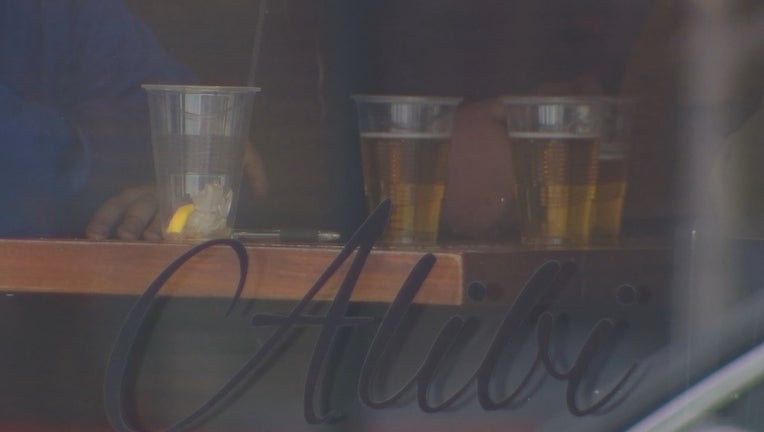 Alibi Drinker in Lakeville defied the governor's order for a second day by remaining open for on-site dining. (FOX 9)

Thursday, Attorney General Keith Ellison filed lawsuits against a bar in Princeton and another in Lakeville. Each faces penalties up to $25,000. The bar in Princeton voluntarily closed, but the Alibi Drinkery in Lakeville remained open, prompting Ellison's office to file for a temporary restraining order against the bar.

For the second day, Alibi Drinkery in Lakeville was open and in violation of state orders and full of customers - one carrying his copy of the U.S. Constitution.

"Sitting down, dining in a restaurant, that’s peaceful assembly, it’s clearly on it’s face a violation of the Constitution," said Nick Hollenkamp, a customer.

The owner said no one from the State has so far told her to stop.

"No papers served to me as of 12 o’clock today," said Lisa Monet Zarza, the owner of Alibi Drinkery.

She said moving forward, she’s ready "to fight for our constitutional rights for Minnesota."

The Department of Public Safety’s Alcohol and Gambling Enforcement did send her a letter, as they don’t visit in person. The letter outlines the penalties of losing their liquor license for 60 days or up to five years if they keep violating, but nothing happens until they have a court hearing.

"Legally, they have the right to have that hearing before the suspension can go into effect," said Booker Hodges, the assistant commissioner of the DPS.

Hodges says he understand the frustration coming from bar and restaurant owners, but this is not a constitutional issue. It’s a public health issue. It’s an order to stop the spread of infectious disease -- just like every other health regulation restaurants have to follow to remain in business.

"Over the last week, there’s 464 people who don’t have that luxury to be frustrated and just think that we can’t allow our frustration to lead to someone else’s hospitalization or death," said Hodges. "We just encourage people to follow the rules."

At Alibi Drinkery, they see it very differently and know it’s a huge risk.

"I’ll jump on that grenade, but I know I have a whole troop of people behind me," said Zarza. "It’s easier to take your grenade when you know you have thousands and thousands of people across the country supporting you and your decisions."

Minnesota Senate Majority Leader Paul Gazelka called the indoor dining ban a "nail in the coffin" for restaurants. He threatened to cut the attorney general's budget for each business Ellison seeks fines against.