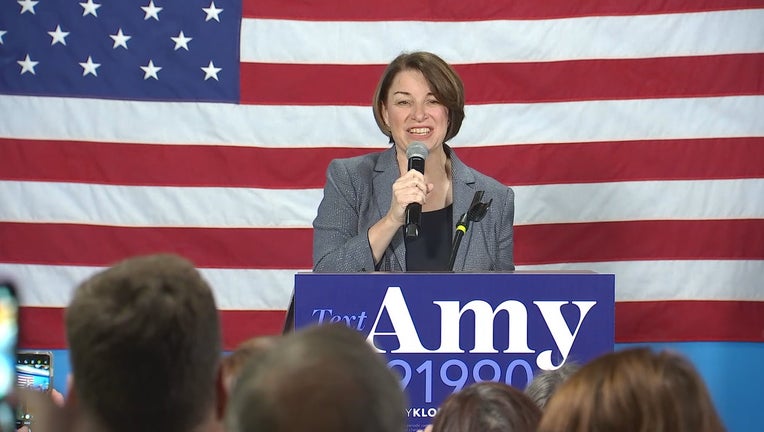 Klobuchar spoke with supporters Saturday evening after returning from Nevada.

MINNEAPOLIS (FOX 9) - Amy Klobuchar was back in Minnesota on Saturday as it appears the 2020 candidate will have a lackluster finish in the Nevada caucus.

Early results show Klobuchar near the back of the pack in Nevada while Senator Bernie Sanders, who surged ahead of former Vice President Joe Biden in polls leading up to the caucus, is projected to earn a big win.

The finish for Klobuchar wasn't unexpected, as polls didn't put her in contention for win, along with a mixed performance in the Nevada debate. But, after a strong showing in New Hampshire, Klobuchar had set her sights on Nevada with hopes of building momentum.

In Minneapolis on Saturday, Klobuchar returned home for a "thank you" event for her supporters, followed by a fundraiser later in the evening.

Speaking during that event, Klobuchar was upbeat about her campaign, saying she felt she had "exceeded expectations" in Nevada.

"But, time and time again, because of all of you, and because of the people around this country who want something different than the guy in the White House, we have won," Klobuchar added.

Klobuchar says her plans following Saturday are to head to South Carolina. Recent polls have shown her getting a bump in numbers there but still trailing the frontrunners, Biden and Sanders, by double digits.

On her way to South Carolina, Klobuchar also plans to hold a rally in Fargo. North Dakota hold its caucuses next month.