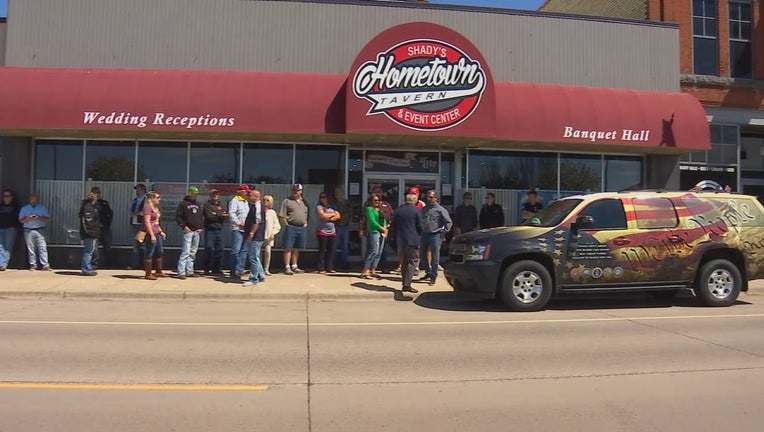 Supporters stand outside Shady's Hometown Bar, which the owner had planned to reopen early despite the governor's order. (FOX 9)

ST. PAUL, Minn. (FOX 9) - A Stearns County, Minnesota judge ruled Gov. Tim Walz has the right to issue his executive order requiring bars and restaurants to shut down during the pandemic after an Albany, Minn. bar announced its intent to violate the order last month.

Shady’s Hometown Tavern will not be allowed to fully reopen without the restrictions from the Governor’s order as the state’s temporary injunction filed against the bar’s owner was granted. The new order allows restaurants to only operate outdoors with a maximum of 50 guests and required reservations.

Controversy over Albany bar heads to the courtroom

The debate over the potential opening of a small-town bar and events center in Stearns County moved from Albany’s Railroad Avenue on Monday to a virtual courtroom on Friday.

“While reasonable minds can agree or disagree with the Governor’s decisions regarding the scope of his Executive Orders, it is clear that the Governor has the statutory authority to issue the Executive Order at issue in this case,” read the judge’s decision. “Allowing the Defendants to unilaterally disregard the Executive Order because of their belief that they have implemented sufficient measures to ensure public safety at their establishments would be contrary to law and public policy.”

Shady’s sought to fight Minnesota Attorney General Keith Ellison’s temporary restraining order that preemptively prohibited Shady’s from reopening after the bar announced its intention to do so on social media.

Shady’s Bar owner: ‘This fight is not over’

“My office has the duty to enforce the law and the Governor’s order, to protect Minnesotans’ health, and to protect businesses that are complying with the order from unfair competition. I take that duty seriously and I am pleased that court has recognized the importance of it,” Attorney General Ellison said in a release.