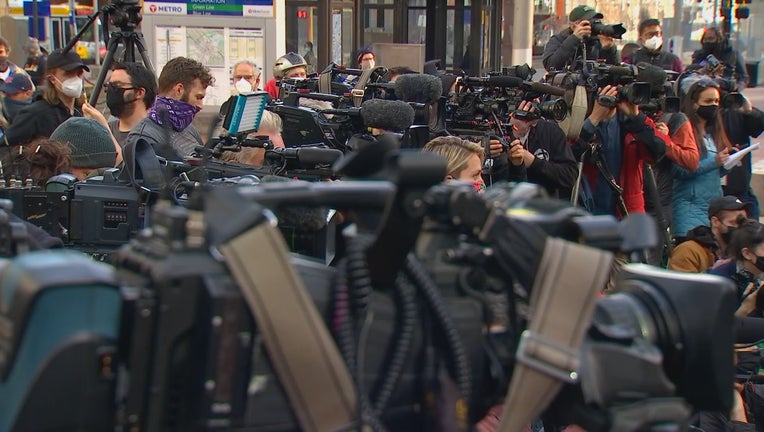 Members of the media set up their cameras for a press conference following the first day of the Derek Chauvin trial. Chauvin is charged with murder in the death of George Floyd. (FOX 9)

MINNEAPOLIS (FOX 9) - George Floyd's death made international news and sparked global protests. Now, media outlets from around the world are in the Twin Cities to cover the trial of former Minneapolis police officer Derek Chauvin in Floyd’s death.

Media outlets from around the world are in the Twin Cities to cover the trial of former Minneapolis police officer Derek Chauvin in Floyd’s death.

"It had a quite big influence on French minds," reporter Matthieu Mabin added.

Guybal and Mabin are two journalists from a sea of foreign reporters in Minneapolis to cover the next chapter of Floyd’s story. France 24’s Mabin came to the Twin Cities to share news of Chauvin’s trial with viewers back in France.

"In the past, I think George Floyd would’ve been a topic in Minneapolis, but definitely today it’s a nationwide topic," Mabin said.

In an emotional speech following the first day of the trial, Floyd's sister spoke of his impact in a short press conference.

"It means so much to know that George has touched so many lives," said Bridgett Floyd.

"Just wanted to make a mark, be here, be live, and tell the world," Bauernebel said.

Journalists from France and Germany say Europe is now paying close attention to all that is happening in Minneapolis.

"After this there were Black Lives Matter demonstrations anywhere from Germany to Sydney, so it is kind of a world phenomenon that happened," Bauernebel said.