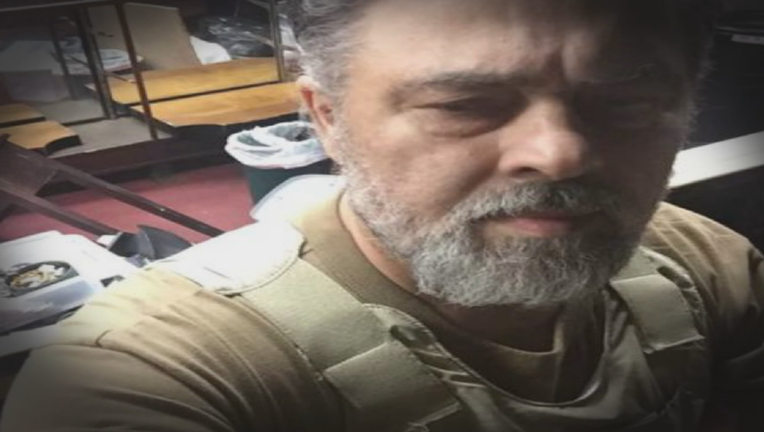 David Sodergren of Executive Protection Global, who posted pictures of himself on social media guarding Thurston Jewelers on the corner of Lyndale Avenue and E. Lake Street, the night after the store was looted.

MINNEAPOLIS (FOX 9) - In the grief and chaos of that last week in May, when 911 calls went unanswered and police were nowhere to be found, some saw an opportunity to make money, as private security agents.

Derrick Banks was one of them.

Operating under the company name International Recovery Agency, Banks was a subcontractor who provided security for a network news crew the night the Third Precinct fell.  He got another gig helping protect Dr. Martin Luther King III.

But Banks, who is often armed, doesn’t have a state license to provide security,  something he candidly admits.

Honesty aside, it is an issue for the Minnesota Private Detective and Protective Agent Services Board, which licenses companies and individuals providing security.

“If they’re not licensed by this board, they are committing a crime, a gross misdemeanor,” said Rick Hodsdon, the board’s president.

“They fly under the radar,” Hodsdon said.

The board recently identified 14 unlicensed companies conducting private security during the recent unrest following the police killing of George Floyd.

Some of the companies were from outside Minnesota, advertising on Craigslist and Facebook for people who want to be security guards.

The board identified others from social media posts.

Like David Sodergren of Executive Protection Global, who posted pictures of himself on social media guarding Thurston Jewelers on the corner of Lyndale Avenue and E. Lake Street, the night after the store was looted.

On social media Sodergren admitted firing a warning shot to scare away looters.  Sodergren has a felony weapons conviction from 1991.

When the FOX 9 Investigators contacted Sodergren he said he didn’t need a license because he wasn’t paid for his services.  He hung up the phone when asked if he could legally own a weapon.

“If everybody else is willing to play by the rules, and these people want to walk around with assault weapons and don’t have a license, some of them might not be legally eligible, that should make a lot of people nervous,” Hodsdon said.

There is an estimated 14,000 people acting as security agents in Minnesota, compared to 11,000 licensed police officers in the state, according to the board.

Under state law, security agents must either have an individual license, or work for a company that holds a license, and is in turn responsible for training and background checks.

But even that’s no guarantee.

“Everything’s so weird how companies are working, because you don’t know who’s actually licensed,” Banks said, who admitted he often works as a subcontractor.  “People don’t look at licensing when they call you.”

Consider the case of Entertainment Protection Group, or EPG.  The company was hired to provide security a couple years ago for Super Bowl LIVE events on Nicollet Mall.

An audit, performed by the Bureau of Criminal Apprehension (BCA), found out of 734 employees working for EPG, 147, or 20 percent, had a disqualifying criminal conviction, like assault, theft, or sex crimes.

Last November EPG signed a legal agreement with the board to allow its license to lapse, and its owner, Erik Bergling, agreed not to hold a managerial position in any security company, like CEO, CFO, Minnesota Manager, or Qualified Representative, for at least 10 years.

That was the end of EPG, or so everyone thought.

But go to EPG’s web site today, and you’ll be redirected to a new company, Aegis Logistics.  And on a page describing the company’s management team you will find pictures of three people, including Erik Bergling.  His title now, however, is “Special Projects.” Hodsdon said the board is limited to regulating only the job descriptions that are specifically spelled out in statute.   “It’s a meaningless title,” said Hodsdon. “Nothing we can do about that.”

Aegis Logistics is one of two security firms providing protection for three Minneapolis City Council members who have received threats.

Bergling did not respond to a call or email seeking comment.

Hodsdon said he has been urging the legislature for years to grant the board broader authority and more resources.

It is one of the smallest regulatory agencies in the state, and yet, it is regulating thousands of people, often armed and sometimes with little formal training, who protect the public at concerts, bars, and sporting events.

But it took a civil uprising to expose a largely unregulated and too often unlicensed industry; a Wild West, only with assault weapons.