Filling every corner of Levee Park on Saturday afternoon, those from the Hastings community and beyond stood in solidarity with school board chair Kelsey Waits and her family.

HASTINGS, Minn. (FOX 9) - Filling every corner of Levee Park, members of the Hastings community and beyond stood in solidarity with school board chair Kelsey Waits and her family.

"One week ago, I was not a proud resident of Hastings. Our city was engaged in a school board race that got ugly. Real ugly. National news ugly," said Kathy O'Keefe, president of the Hastings-Prescott Area Arts Council.

Kelsey did not win her bid at re-election but will finish out her term. The loss came as a bit of a relief for Kelsey and her husband, Chris, who recently told CNN how during her campaign, members of a group called "Concerned Parents of Hastings" outed their 8-year-old transgender child, Kit, on social media.

Kelsey says she was impressed by the number of people who showed up on Saturday afternoon for her family and all transgender kids.

"Honestly, it's been such an emotional roller coaster. I didn't know if I would be able to say any words," said Kelsey. "It was almost overwhelming. I wouldn't have expected...this number of people to show up. It was amazing, it was amazing."

Kit's presence was visible on signs that read "I Stand With Kit," but they didn't attend in person.

"They aren't out front with us because I want them to just be a kid," said Chris.

In the days since Kelsey went public with her family's story, none of the people responsible for outing Kit have apologized, but Kelsey has received some responses.

"I have gotten emails from some of those individuals who said, 'I knew what was being said, and ​​I'm so sorry, and I will never be silent again,' and that's the group we needed to reach," said Kelsey. 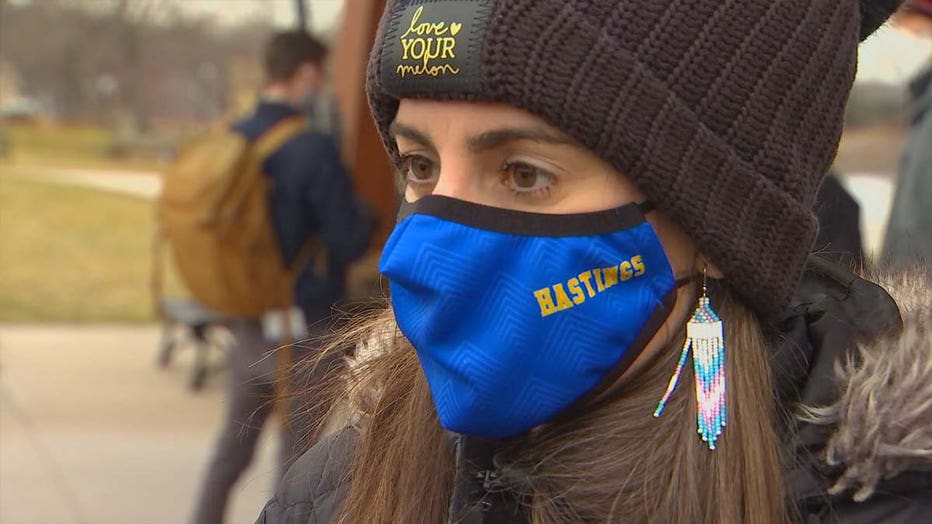 The family has now made the decision to leave the city and make a new home somewhere else where they can focus on healing together.

"There has been a lot of trauma in this community, in the home we live in, in the neighborhood we live in, and we need to stop reliving that," said Kelsey.

Kelsey and Chris tell FOX 9 that the rally hasn't changed their minds about moving, but they would like to thank everyone for giving them a great memory to take with them.

Wednesday night people in Hastings are turning on their porchlights to show support for the Hastings School Board Chair and her family.