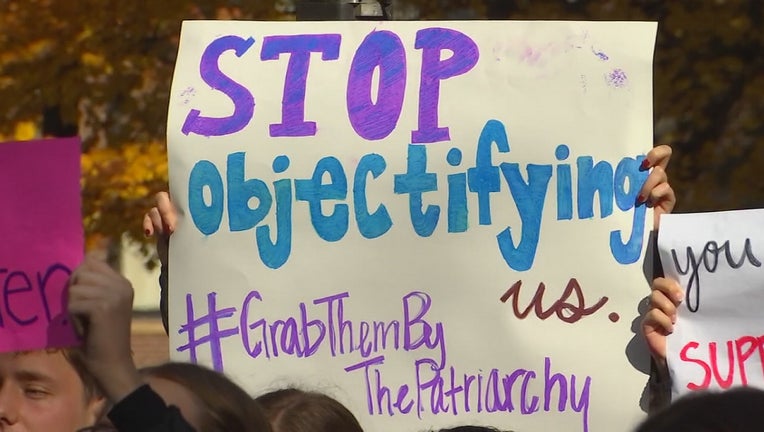 COLLEGEVILLE, Minn. (FOX 9) - Hundreds of students from the College of St. Benedict and St John’s University walk out of class today following allegations of a sex competition on campus.

At this point there’s no criminal investigation, but the Catholic university is investigating, after first being informed of an alleged sex competition late last month.

Hundreds of students from St. Ben’s and St John’s University walk out of class today following allegations of a sex competition on campus.

After walking out of class Thursday, students gathered on St. John’s campus, not far from Patrick Hall, where an alleged sex competition started.

In recent emails to students and another sent to parents Thursday, the university says St. John’s Campus Life was informed late last month about the apparent competition between the first and second floors of the all-male dorms.

The apparent goal was to see who could sleep with the most women.

"We want administration, as well as students perpetrating these acts, to know that’s not what we stand for as a community," IWF student director Julia Geller said.

The Institute for Women’s Leadership at St. Ben’s, organized Thursday’s walkout and sit-in attended by Bennies, Johnnies and faculty condemning the allegations.

"We don’t necessarily talk about this issues enough," someone said.

"Education only goes so far.. before we need to start saying this is not OK on our campus," St. John's junior Sean Fisher said.

For several in attendance, this brings to light bigger concerns about campus culture.

"That was more the catalyst of a pattern of students getting frustrated that St. John’s students aren’t being held to the same standard as St. Ben’s students," said Sydney Robinson, diversity and inclusion program manager. "There is, unfortunately, toxic masculinity or misogyny that’s going on whether they attend St. John’s or they attend St. Bens."

The university said in a statement that they "have hired an external investigator, the same law firm that conducts our sexual misconduct investigations."

Floor meetings at Patrick Hall have already taken place to address the issue and determine who is responsible.

Meanwhile, IWL has several demands for the university, including enhanced training for RAs in resident halls and increasing campus security at night.

The university expects their investigation to take a couple of weeks and are encouraging anyone who knows anything about the competition to come forward.