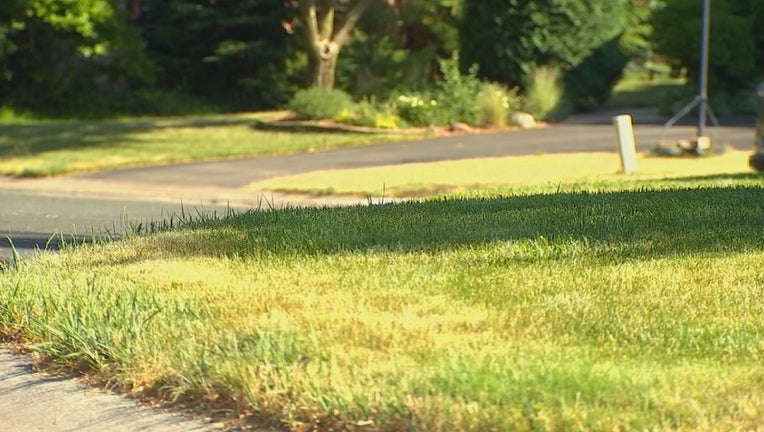 Browning lawns are a common sight across Minnesota due to the dry weather. (FOX 9)

(FOX 9) - As a drought continues across much of the state, it’s getting harder and harder for many homeowners to look outside at what their lawns have become.

"Most of us pretty much have brown dead grass," Jason Whitham of Burnsville said.

"The lawns can handle a lot," Beutz explained. "It takes a lot to kill a lawn."

If your city isn’t restricting water use, Beutz says it’s important to keep watering your lawn throughout this drought.

"Best time is in the morning. We usually recommend every other day," Beutz told FOX 9. "Whatever you were doing like in a regular season, I would right now because it’s been so dry I would increase it like 150% of what you were doing before, so time and a half."

With the grass under so much stress, you don’t need to mow as often either.

"If it’s going real brown we recommend to skip it a little bit until it comes back," Beutz said.

When it’s time to mow again, make sure you’re cutting higher, with a sharp blade.

"We’ve been moving up over the last month, in the spring we cut it shorter," Beutz said. "Now we’re close to 4 inches."

Maggie Reiter with the University Of Minnesota’s Turf Grass Science Program says, "Don’t apply any products like fertilizer or weed killer or herbicide. The grass isn’t growing very much so those products aren’t going to be taken by the grass and used very well."

More than three-quarters of the lawns in Minnesota have Kentucky Blue Grass, which can start turning brown within seven days without water, but that doesn’t mean that it’s dead. The grass has only entered a drought-induced dormant state. Its green color can and will come back in full if enough moisture returns.

"Most ones I think will come back but some might get too toasty," Beutz finished.