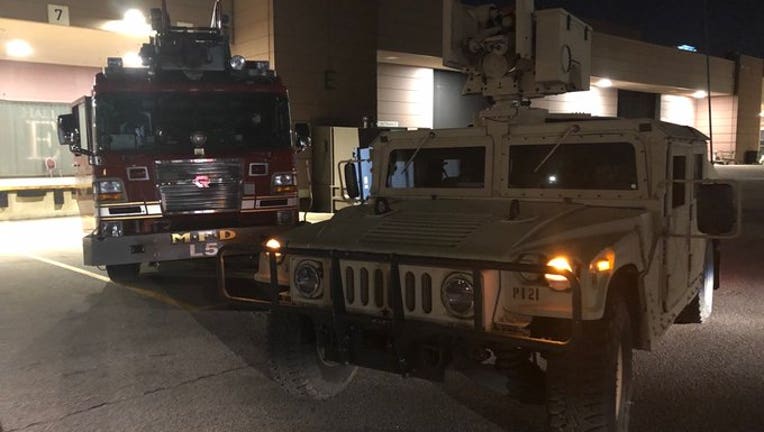 Speaking at a press conference Friday morning, Jensen says the Guard started notifying soldiers early Thursday morning of a pending mission without knowing exactly where or how they'd be mobilized. Jensen said he had concerns about the lack of a clear mission for the National Guard, saying, "We never got such a mission assignment. We never got such a mission description."

Governor Tim Walz says as of midnight the state is now in the lead for response. When pressed on why response didn't come sooner, Walz and Jensen pointed to limited time for planning.

"I can't just march my soldiers into Minneapolis and say this is what Jon Jensen says we need to do," Jensen added.

Walz also pointed to a lack of specific requests from Minneapolis Mayor Frey.

Walz says Minneapolis officials were telling the state early Thursday that the 3rd Police Precinct may not be held. It was abandoned late Thursday evening and fell to rioters.

Walz is asked about a curfew or declaring marshal law, Walz said, "All those tools are there," but did not say when or if he'll employ them.

Walz says the state's plan for Friday night is being "worked out now," and hopes to make it public by 2 p.m.

The Guard's missions so far

Once deployed, the Minnesota National Guard has taken part in four missions overnight.

The first mission came from the governor directly to secure the State Capitol from a report an "immediate impending threat." The Guard and the Minnesota State Patrol worked together to provide security in that area.

The second and third missions happened in St. Paul. The Guard provided security around the Ramsey County law enforcement center and around the Minnesota Bureau of Criminal Apprehension. This was done in order to allow the St. Paul Police Department to work in other areas of the city where protests were breaking out.

The fourth mission was to work with the Minneapolis Fire Department to help provide security for the fire crews as they continued their work overnight to put out fires throughout the city.

Just after midnight this morning, Walz ordered a "law and order" mission to secure the area around the Minneapolis 3rd Police Precinct. That mission is ongoing, along with Capitol security and protecting firefighters, Jensen says.

Jensen also recommends that the Guard continue to help secure the State Capitol and continue support for the Minneapolis Fire Department.

The Guard will continue to operate until the governor relieves them.