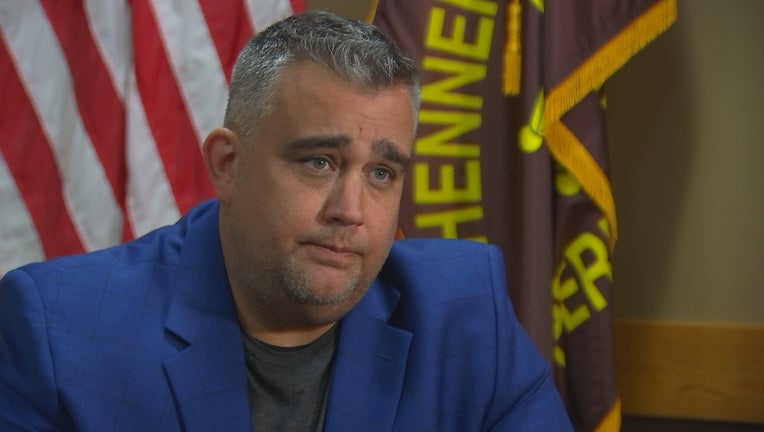 "I think the DFL has changed. I’ve changed my perspective. A lot of people from DFL are not super pleasant to be with," Hutchinson said.

Hutchinson, a former Metro Transit Police sergeant, was the DFL-endorsed candidate in 2018 when he ran against incumbent Rich Stanek. He was even endorsed by former Democratic presidential candidate Hillary Clinton.

But his views would have shocked political allies if they had checked his personal Facebook page, David P. Hutchinson, which had been inactive since 2016.

In a series of Facebook posts in 2015, not previously reported, Hutchinson posted offensive memes about Democrats, compared Hillary Clinton to Hitler, and posted a parody campaign sign that read, "Hillary for Prison 2016."

In a post from August 23, 2015, Hutchinson wrote, "If you support Hilary (sic) or anyone affiliated with this f---ing criminal Obama you need to take your ass outa this country. They have ruined it." 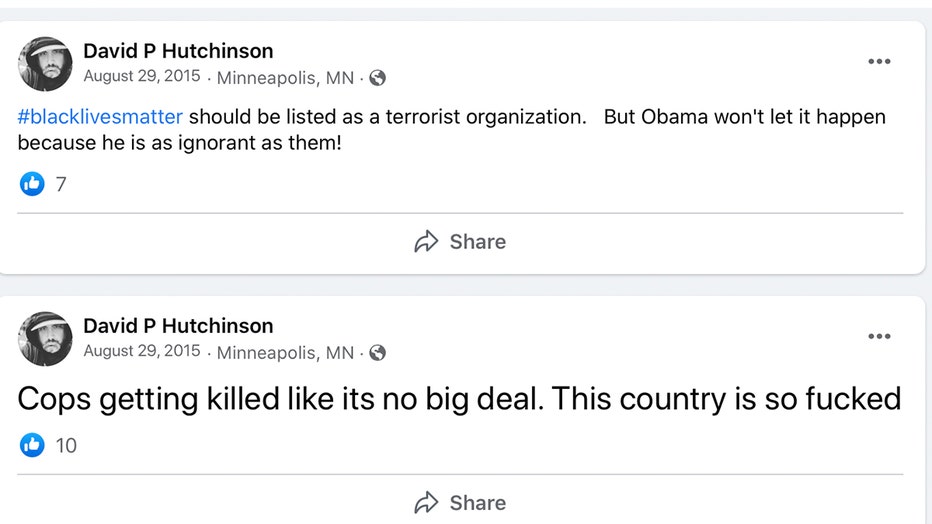 "The reality is I’m pretty moderate, I’m pro-choice, all for equality (as long as not equality for special groups and not everyone). I just HATE the liberal left and their stupidity on every single f---ing topic." 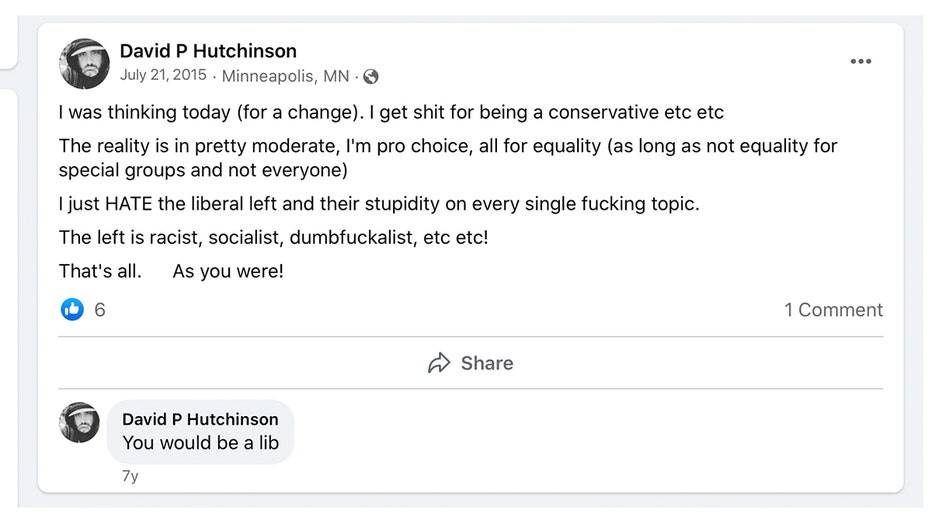 Commenting on an assault case in Milwaukee on August 29, 2015, Hutchinson wrote, "If this was a black person being beaten up by whites and they said ‘wrong hood’ the country would be in looting and riot mode! I’m sick of being treated so bad, I need to quit my job and have Obama pay my bills."

In the recent podcast, which was with "Black and Blue with AK and Officer Jai," Hutchinson answered questions from businessman A.K. Kamara and Bloomington Police Officer Jai Hanson, a former political opponent who was running for Hennepin County Sheriff as an independent before losing in the primary.

Hutchinson was asked about a FOX 9 Investigators story in July that revealed he sent racist text messages to members of his command staff, who have filed a hostile work environment complaint with Hennepin County. Hennepin County hired an outside investigator whose work is ongoing.

"We’ve all have said in text some dumb things. I think we can all attest to that. I’m not a racist," Hutchinson said.

In one text message from the FOX 9 report, Hutchinson criticized a colleague and said, "People are sick of black people getting things solely on being black."

"Did I say that? Probably," Hutchinson demurred.

"Gay people shouldn’t get some things because they are gay. As a gay person I shouldn’t have been elected because of that," Hutchinson said.

During the interview, Hutchinson confirmed reporting from the FOX 9 Investigators that he has been diagnosed with PTSD. Hutchinson has been on medical leave since May 18.

Hutchinson is not seeking re-election in November.

"I’ve been out of the media light on purpose," he said.

"I’m trucking on, but it’s been a tough go. Everyone’s human," he said.

Hutchinson said it was his first interview since his drunk driving crash Dec. 8, when he did "a couple of interviews that went awful."

Asked about future plans, Hutchinson said moving to a warm climate and speaking about mental health. He called himself "a dynamic speaker."

The state’s licensing board for police officers, POST, suspended Hutchinson’s license earlier this month for 30 days, beginning Nov. 22. Hennepin County Administration has not decided whether it will be paying Hutchinson while he is suspended.