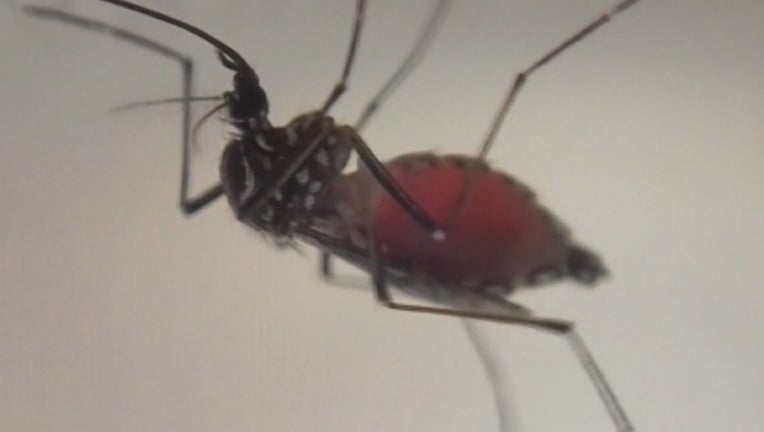 Despite the dry weather, the Twin Cities are seeing an increase in a certain type of mosquito. (FOX 9)

SAINT PAUL, Minn. (FOX 9) - If you’ve been outside anytime in the last month, you know it’s been dry and hot, but Minnesota’s steamy weather is having an impact on the mosquito population, and not in a good way.

The lack of moisture means the overall number of mosquitoes is down, but the Metropolitan Mosquito Control District says the agency is seeing a rise in the number of Culex mosquitoes in the metro. This breed of bug is particularly bad because they are the primary carriers of West Nile Virus.

If you’ve been outside anytime in the last month, you know it’s been dry and hot, but Minnesota’s steamy weather is having an impact on the mosquito population, and not in a good way.

"There is some concern from our vector ecologists that we are going to see a high year for West Nile virus," said Alex Carlson, public affairs coordinator for the Metropolitan Mosquito Control District.

"They like warm temperatures. They love to breed in our containers - anything that’s holding water, like waste sites, catch basins on the side of the road," said Carlson.

So far this summer, MMCD hasn’t trapped any mosquitoes with West Nile Virus and there haven’t been any confirmed cases of the virus in Minnesota, but the agency is staying vigilant.

"The more of them there are, the higher the chance is that one of them is going to have the disease to spread to people. We are out monitoring. We set traps out so we can bring them back here and test them and see if they are carrying the pathogens for West Nile virus," said Carlson.

According to the Centers for Disease Control and Prevention, there have been confirmed human cases of West Nile Virus in Iowa, Illinois, Arkansas and Arizona in 2021.

Carlson recommends wearing long sleeves, pants and bug spray with DEET in it during peak biting times at dawn and dusk.