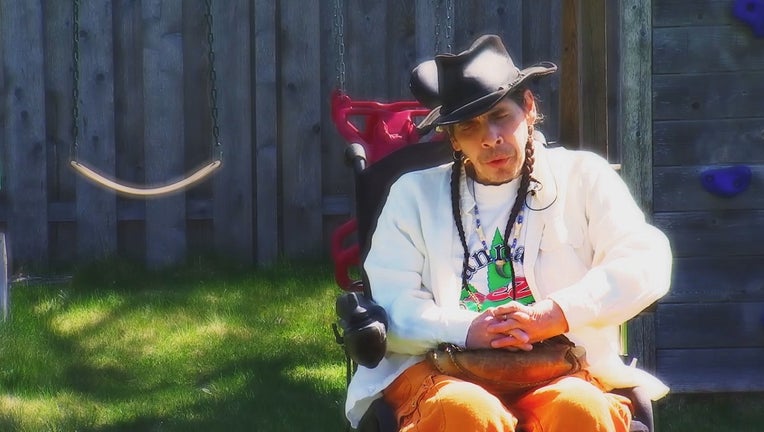 Kevin Ne Se Shores says he was urged to run for the Grassroots Legalize Cannabis Party by someone who turned out to be a GOP operative. (FOX 9)

(FOX 9) - Blind and permanently disabled, Kevin Ne Se Shores is accustomed to navigating life’s obstacles, but it has never stopped him from pursuing his third-party political ambitions.

Still, he was surprised by the unsolicited call he got in June of 2020 from a man who encouraged him to run against Congressman Collin Peterson (D-MN) as a candidate for the Grassroots Legalize Cannabis Party.

Congressional candidate says he was tricked into running by RNC strategist

A blind Minnesota veteran says an RNC strategist recruited him to run for Congress as a Grassroots Legalize Cannabis Party candidate, even going as far as paying for his filing fee.

Shores, who suffers from Gulf War Illness, used cannabis to get off pain killers.  He told the FOX 9 Investigators he assumed he was being recruited by a member of the Grassroots Legalize Cannabis Party.

"I was under the impression he was a part of that political party," Shores said.  "That was my assumption."

Unknown to Shores, the man who called encouraging him to run was a Republican strategist, Kip Christianson, who at the time was on the payroll of the Republican National Committee, according to the Federal Election Commission.

On the day of the filing deadline, June 2, 2020, Shores said Christianson made a seven-hour roundtrip to pick up his notarized ‘Affidavit of Candidacy’ in Moorhead and delivered it to the Secretary of State’s Office in St. Paul, 45 minutes before the filing deadline.

"I said, ‘How much is the filing fee?’ and he said, ‘Don’t worry about it.’ And again, I’m assuming this is the Grassroots Cannabis Party," Shores said.

Shores said he only learned Christianson was working for the Republican Party after the election.

Christianson, a Harvard graduate from Monticello, has a resume that includes being a Trump delegate to the 2016 Republican National Convention in Cleveland, a treasurer for the Minnesota Young Republicans, and a candidate tracker for the MN Jobs Coalition.  He also ran unsuccessfully for Minnesota Party Co-Chair.

Christianson told the FOX 9 Investigators he never misrepresented himself as a member of the Grassroots Legalize Cannabis Party.  But when asked specifically if he ever told Shores he was a paid Republican strategist, Christianson said, "No comment."

In a statement, a spokesperson for the Republican National Committee (RNC) denied any role in recruiting Shores under false pretenses.

"The RNC has no knowledge of this, nor would we have authorized anything like what is being alleged," said RNC spokesperson Preya Samsundar.

Christianson’s alleged deception of Shores, and the extent he went in facilitating Shores’ candidacy, has not been previously reported.

It does, however, fit a broader and well-documented pattern of Republicans, or at least supporters of President Trump, running for office as third-party candidates in swing legislative and congressional districts, in an apparent attempt to siphon votes from Democratic candidates.

The Minnesota Reformer has previously reported that many of those legislative candidates in 2020 had social media posts supportive of Trump and conservative issues, but little in the way of advocacy for legalizing cannabis.

The ringers ran on either the Grassroots Legalize Cannabis Party or Legal Marijuana Now Party.  Both parties have major party status in Minnesota because they achieved more than five percent of the vote in a state-wide election, which means it is not necessary to collect signatures to get on the ballot.

The most high-profile case is Adam Weeks, an organic farmer who ran for congress in Minnesota’s 2nd Congressional District under the Legal Marijuana Now Party.

Weeks died from a fentanyl overdose 42 days before the general election in November, but still pulled in 6 percent of the vote.

"They want to me to run as a third-party liberal candidate. I can play the liberal, you know that, against (Angie) Craig and that other guy (Tyler Kistner)," Weeks said in the recording obtained by the FOX 9 Investigators.

"I imagine it will be quadruple in 2022," Steinberg said.

"These people who were filing didn’t even know the name of the party they were filing for," Steinberg said.

On the ‘Affidavit for Candidacy’ filed with the Secretary of State, candidates must affirm that they either "participated in the party’s most recent precinct caucuses or intend to vote for a majority of that party’s candidates."

Steinberg said no one enforces that, even if they could, because voting is confidential.

But the recruitment of Kevin Shores is particularly egregious, he said.

Much to Kevin Shores surprise, he lost to primary opponent Rae Hart Anderson, who has run for office twice before as a Republican.

David Schultz, an expert in election law at Hamline University, said while there is "nothing at all wrong about encouraging people to run for office," the recruitment of Kevin Shores may have crossed a line.

"The deception really changes, or reframes, the story to make it look like someone is being tricked and somebody is being offered something of value as part of that trick," Schultz said.

State law says "a person may not reward or promise to reward another in any manner to induce the person or refrain them" from being a candidate.

Schultz said there may be nothing illegal about paying a candidate’s $300-filing fee, it must be disclosed as an in-kind campaign contribution.

"If I give something of value to somebody in order to encourage them to run or not to run, that violates state law," Schultz said.

The problem, Schultz said, is "there are no watchdogs anymore."

While Minnesota may do great with voter turnout, he said, the state has become notoriously weak at regulating campaigns and fair practices.

It’s not just about winning races anymore, he said, it’s about undermining the process.

"What is happening here is the very rules of the game are being challenged and undermined. And a situation like this really pointing to the changing nature of American politics and how parties are not willing to play fair anymore," Schultz said.

Sounds like the very reason Kevin Shores wanted to run for congress. He just didn’t know who was signing him up, or the endgame.

"I call them now the powers that should not be," Shores said.