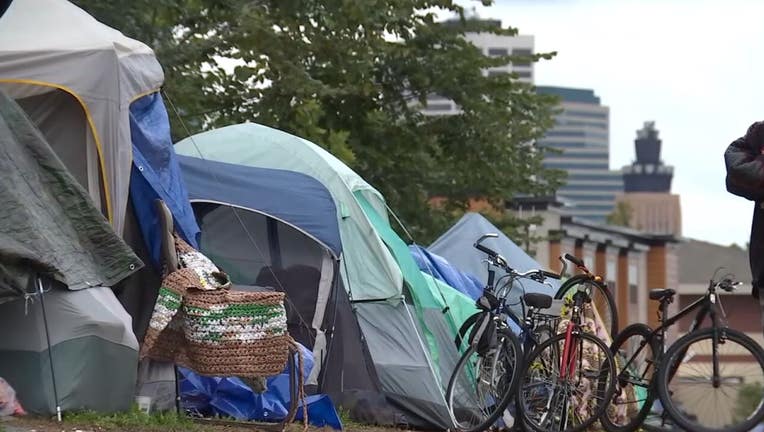 MINNEAPOLIS (FOX 9) - Gov. Tim Walz launched a new initiative Thursday that aims to help Minnesota’s homeless find a warm place to stay this winter and he and other state officials are calling on all Minnesotans to help.

In Minnesota, about 8,000 people are struggling with homelessness. On any given night, more than 1,600 people sleep outside, including 300 children and minors—a number that has doubled in just the past five years. Walz said those statistics need to be turned around.

Thursday, the state launched the Winter Homeless Initiative to bring inside Minnesotans without shelter.

The Winter Homeless Initiative is a public-private partnership that includes the creation of the Minnesota Homeless Fund, a nonprofit that has already raised more than $4 million in corporate and charitable donations. Best Buy founder Richard Shultz and the Pohlad Foundation are among the largest donors.

The Minnesota Homeless Fund has already provided funding for an additional 150 beds at half a dozen shelters around the Twin Cities.

“This is real, these are people. When you talk about 1,600—each of those is a human being,” Elena, an outreach worker, said at the news conference Thursday. “This is not in theory. This is not a concept. This is real. This is life or death.”

Walz is now calling on all Minnesotans to donate or volunteer.  He is also urging local governments to look for creative ways to make underutilized spaces available as shelter.

“This is a part of a longer, strategic plan working on the issue of a shortage of affordable—deeply affordable—housing and livable housing,” Walz said. ”We understand this is a triage or a surge situation to get people out of a dangerous environment and so much more goes into getting to shelter and then getting to permanent housing.”

Last winter, the City of Minneapolis opened a navigation center to help the city’s homeless get off the streets. The city says, during the coldest months, it was able to house about 175 people, eventually connecting many to other resources like nursing homes or treatment programs.

Thursday's announcement comes on the 35th anniversary of the annual Homeless Memorial March, an event organized by Simpson Housing Services that recognizes the names and lives of those homeless who died in the past year—underscoring the immediate need for shelter.