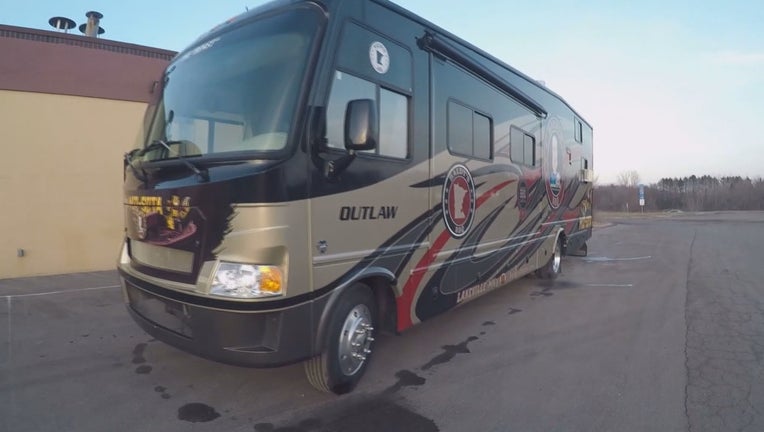 One Gopher fan is bringing his RV called "The Beast" to the Minnesota-Iowa. (FOX 9)

MINNEAPOLIS (FOX 9) - Some Gopher fans are going all out ahead of the game, planning huge tailgates in Iowa City.

Brian “Baldy” Wheeler’s RV is called “The Beast” and for good reason. It’s got all the ingredients for a perfect tailgate.

Gopher fans bringing out the RVs for Iowa game

Some Gopher fans are going all out ahead of the game, planning huge tailgates in Iowa City.

“We got our couch, this is one bed, then I have another bed above the garage over there,” Wheeler said.

That’s right, there’s a garage on board too.

“You walk right into the garage that’s where the ‘Little Beast’ stays - he’s sleeping ‘til tomorrow morning,” said he said.

“Little Beast” is the affectionate name for his golf cart, so they can make sure to hit up all the other tailgate parties too.  Then of course, there has to be the perfect food.

“I got a smoker in there, we’ll throw things in there tonight and get it going and then tomorrow it will be good to go and whoever stops by, we got food for them,” said Wheeler.

Wheeler also happens to be the owner of Baldy’s BBQ in Lakeville, Minnesota. He’ll be sure to have the meat ready to go.

He’s welcoming any Gopher fan to stop by his tailgate Saturday in Iowa City, which will be a first for “The Beast.”

The former Mizzou football player pays homage to the Tigers on his RV with the “Miz” in “Miz-sota,” but his heart is with the Gophers now, no matter where this season takes them.

“It’s been unbelievable, it’s been a heck of a ride and I’m not ready for it to stop,” said Wheeler.

Some RVs are already in place in Iowa City.