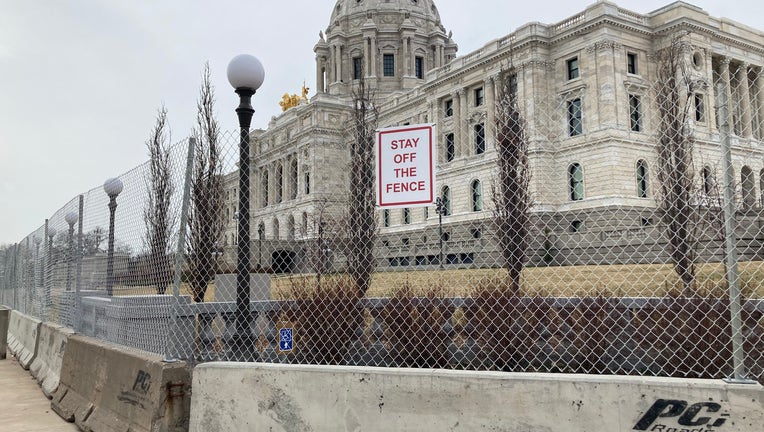 A security fence surrounds the Minnesota State Capitol during the trial of Derek Chauvin. (FOX 9)

ST. PAUL, Minn. (FOX 9) - Minnesota officials say the security fence that has surrounded the state Capitol for nearly one year should come down soon.

The departments of Public Safety and Administration are recommending removal of the fence after the legislative session ends. The Legislature adjourns its regular session May 17.

"Absent any credible threat to the building, the recommendation from both state agencies is to remove the fencing after the legislative session ends," Curt Yoakum, a spokesman for the Minnesota Department of Administration, said in an email. "This timing allows ample time for the contractors to schedule the work and for the work to be completed without impact to those who work at the Capitol."

Fencing has been in place since May 2020 when rioting broke out in Minneapolis and St. Paul after the police killing of George Floyd. State officials then ordered a larger, reinforced fence this spring ahead of Derek Chauvin's murder trial.

The state is in the second month of a four-month rental of the latest fence. The installation cost $68,117 and the fence carries a $12,015 a month rental charge, according to the purchase order.

The previous fence, which had been in place since the riots that followed Floyd's death, cost taxpayers more than $100,000 before its removal. It was less secure but also cheaper, costing $18,000 to install and $8,200 a month to rent.

It's not clear if the fence would stay up for a potential special session. The Legislature is in the early stages of budget negotiations and often needs extra time beyond the regular session.

Gov. Tim Walz has proposed funding permanent security upgrades at the Capitol, though he has left it up to lawmakers to decide how to approach the matter.