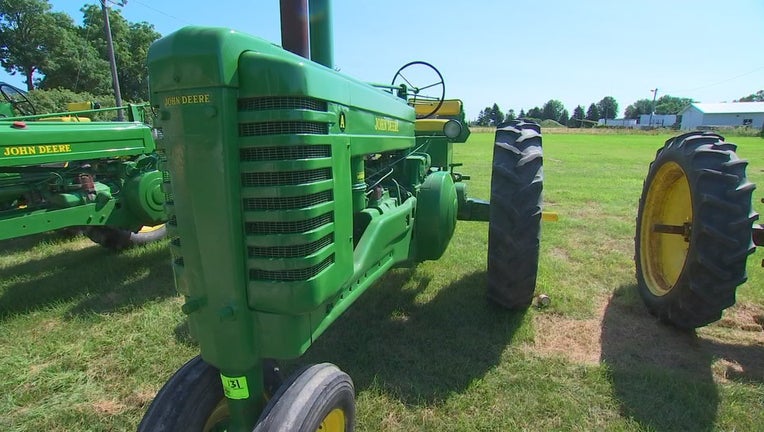 A John Deere tractor sits on a Minnesota farm. (FOX 9)

Located near the town of Danube in Renville County, Darnell and Merlene Bratsch spent five decades here farming with their two sons, before calling it quits earlier this year.

After 51 years, the sun finally did set on Sunset Farms. &nbsp; Located near the town of Danube in Renville County, Darnell and Merlene Bratsch spent five decades here farming with their two sons, before calling it quits earlier this year.&nbsp;

“51 years of struggle and in the end, you still struggle, emotionally,” Darnell said.

In July, the couple sold all their farm equipment at auction at the county fairgrounds.

The Bratch’s sons, Daren and Damon were there, hoping to buy back three of old tractors, family heirlooms in John Deere green.

“John Deere has been in our family since our grandfather bought it new in 1950, so that is really important to keep in the family,” Daren said.

But it was all too much for Darnell and Merlene, who stayed home.

“When they moved it to the fairgrounds that was a tough day, when it went down the driveway. I never got super involved in the operation, but I watched him that day and it was very difficult. He looked like a whipped puppy,” Merlene said with tears in her eyes.

“You live it, you breathe it and it’s gone, come down to living on social security,” Darnell said.

How could that be?  After so many years of farming, so little to show for it.

The story of how the Bratsch’s got here is a kind of cautionary tale from the heartland: of choices made, chances taken, and the fickle whims of weather.

“Last year’s poor crop, too much water. And we had insurance, but insurance just ain’t enough to pay the bills,” Darnell said

The Bratsch’s never owned their own land and rented almost 3,000 acres.

It meant surviving on credit from one year to the next and often going into debt.

They were always cash croppers: corn, sweet corn, soybeans, and oddly enough, wheat.  They were the only wheat producers in Renville County.

But there were also deeper economic forces at work.

Around the beginning of this decade, crop farmers were getting record prices, $7 for corn and $16 for soybeans.

“I said at the time that was bad for us, because everyone geared up for that high price too, all your suppliers’ inputs and landlords, we all knew it wasn’t going to stay like that,” Darnell recalled.

He was right, of course. In 2014, the bottom dropped out, corn and bean prices plummeted.

But others costs, like fertilizer, seed, machinery, and land rents, kept going up, like a runaway auction.

For many farmers it began slowly eating away equity, and pushing them deeper into debt.

“Lucky for us it was retirement time. I said if I was 20 years younger I would’ve stayed in to fight the battle.  But at my age, I thought why do this anymore,” Darnell said.

The Bratsch’s are hardly alone. Henslin Auctions had 45 more auctions before the end of the year.  And most of them were farm couples like the Bratsch’s, on the bubble, trying to make the call to keep going, and go deeper in debt, or get out while the getting is good.

“Usually we get to a situation where there isn’t a lender that will help them. We just run out of options,” said Steve Zenk, a farm advocate with the Minnesota Department of Agriculture.

Zenk is a kind of social worker for farmers in a financial crisis.

“I tell them you can still make decisions here. But you’re on a track where others will start making decisions for you, sometimes it’s selling land, selling property. Pay the debt down, restructure what’s left and go forward,” Zenk said.

Back at the auction, the Bratsch family was left looking for a silver lining.

“It is sad but I’m proud at that same time,” Daren said.

His brother, Damon added, “We had a lot of this machinery for many years but you can see how well we took care of it.”

The hope with the auction was to allow the Darnell and Merlene to pay off debts and keep their home.

And when it came time to auction off the three tractors, which have been in their family for generations, most other bidders suddenly fell silent, clearing the way for something to celebrate.

The Bratsch’s granddaughter was able to buy one of the tractors for $1,456. The other two tractors also were sold and were able to stay in the family.

The auction brought in less money than the Bratsch’s were expecting.  They are still left with debt. They believe they will be able to keep their home.