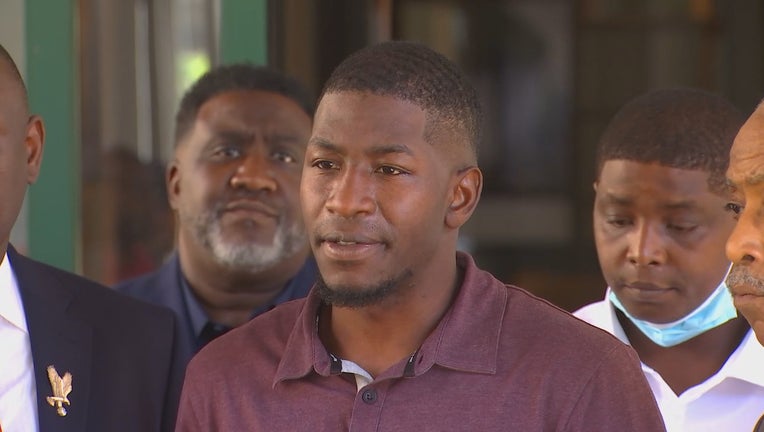 MINNEAPOLIS (FOX 9) - As his family and Minneapolis as a whole prepare to honor his life, the son of George Floyd took some time Wednesday to pay tribute to his late father.

Visiting the site where his father died at 38th and Chicago in south Minneapolis more than a week ago, Quincy Mason Floyd kneeled in prayer.

The son of George Floyd, the man who died in police custody last week, visited a memorial set up to honor his father in Minneapolis

"I'm here reuniting with my family, trying to get justice for my father," said Quincy. "No man or woman should be without their father."

Quincy Floyd addressed hundreds of supporters who continue to gather at a growing memorial on the corner of 38th and Chicago.

"I appreciate everyone for showing their support and love," he added. "I thank you all for that."

The attorney representing George Floyd's family responded to the new charges filed against the officers in the case.

"Change is going to come in the tragic killing of George Floyd and I proclaim with his son as my witness, that change starts today," said Crump.

On May 25, Floyd died after being pinned to the ground by a Minneapolis police officer, with a knee on his neck while handcuffed. His death sparked nationwide outrage. All four officers involved were fired and now face criminal charges.

Attorney Crump tells the crowd that this is a tipping point in America.

"Because we cannot have two justice systems in America," said Crump. "One for black America and one for white America. We must have equal justice for the United States of America."

A private memorial for Floyd is planned for Thursday. FOX 9's coverage will start at noon.