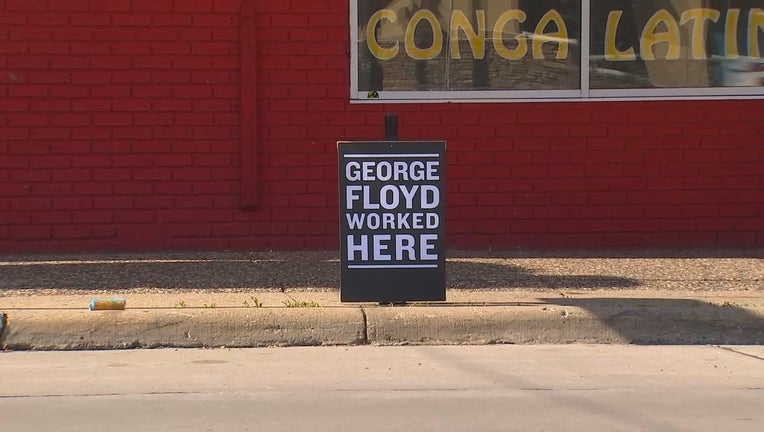 A sign created by a local artist stands outside the Conga Latin Bistro, where George Floyd once worked. (FOX 9)

MINNEAPOLIS (FOX 9) - Signs created by an area artist are appearing in northeast Minneapolis with the intent to stir conversation about the Minnesotans who’ve died at the hands of police and serve as a reminder that people are connected in ways they may not realize.

"I think that’s a big part of it, saying their name, realizing they were whole people and not just a story," said Witt Siasoco, a community-based artist. "They were people who lived here."

Signs created by an area artist&nbsp;are appearing in northeast Minneapolis with the intent to stir conversation about the Minnesotans who’ve died at the hands of police.

In total, there are three signs around northeast Minneapolis with the names of three people killed by police officers in the Twin Cities. All three had a connection to this part of town.

George Floyd worked at Conga Latin Bistro on Hennepin Avenue. Daunte Wright went to Edison High School less than 2 miles away. Terrance Franklin, a 22-year-old who shot and killed by Minneapolis police in 2013, lived across the street from Siasoco and his family – also in northeast Minneapolis.

"When Terrance passed eight years ago, I didn’t do anything," said Siasoco. "I was kind of paralyzed by the moment and didn’t know what to do and there’s a lot of regret I have with that because that’s someone I had a personal connection to."

The project is part healing for the community-based artist and his wife, who was also Terrance’s teacher at Edison High School, and part call for policing changes.

"All the names listed in this project or these signs were tragically lost by the hands of police and eight years later after losing Terrence we haven’t seen that much change," said Siasoco.

He hopes the messages on the signs "George Floyd worked here," "Daunte Wright went to school here," and "Terrance Franklin lived here" are reminders that these were real people with real lives, and real loved ones – and more than just a name in a headline.

"These people lived and worked here and went to school here their lives mattered and hopefully people say their names and remember them as individuals and not just a person who died by the hands of the cops," said Siasoco.