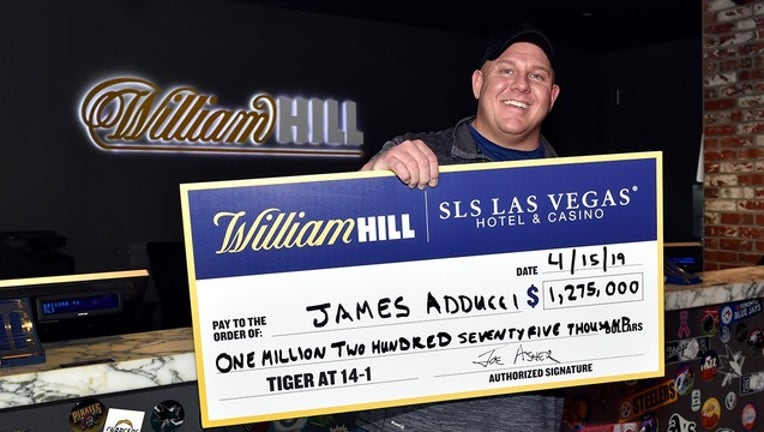 James Adducci stands with a ceremonial check after cashing his ticket in Las Vegas on April 15, 2019. Adducci placed an $85,000 wager on golfer Tiger Woods to win the 2019 Masters Tournament. (Photo by David Becker/Getty Images for William Hill US)

FOX NEWS - The gambler who placed an $85,000 wager on Tiger Woods winning the Masters — ultimately winning $1.2 million — says he was tens of thousands of dollars in debt as recently as four months ago.

James Adducci, 39, made the bet with William Hill at 14-1 odds last Tuesday, the company said. When Woods won the golf tournament on Sunday, the betting business said it turned into a $1,275,000 payout — the largest golf-related payout in the company's history.

Adducci told Golf Digest after the big win that he flew from Wisconsin to Las Vegas last week to place the bet, which he claimed was the first he'd ever made on sports in his life.

The wager, Adducci said, was "everything I had that I could afford to lose."

He explained that he took the $85,000 cash out, put it in a backpack he just bought at Walmart, and ordered a shared Lyft ride — "so he could save $2" — which he shared with a mother and child who were talking about money problems.

“I felt sick, knowing that I had $85,000 in my backpack and they were talking like this,” Adducci told The Action Network. “If I see them again, I would help them out.”

Less than four months prior, Adducci said he himself was $25,000 in debt after his protein supplement business had gone under.

After the ride, Adducci placed the bet at SLS Las Vegas Hotel & Casino, the sportsbook which is operated by William Hill. Two other casinos rejected his wager.

"A month before is when I knew I was going to do it," Adducci said. "I had been thinking a lot about this. I watched Tiger's performance at the Tour Championship, and things seemed to be going his way."

He continued: "I looked at how well he did there, and some other factors you can't put stats behind. It wasn't about the stats for me. The fact that this was going to be his first major in front of his kids, I was convinced he would win."

And Woods did win. In his fifth-ever Masters victory, the legendary golfer shot a 2-under par 70 to win his 15th major championship — and Adducci won $1.275 million.

Get updates on this story on FOXNEWS.com.