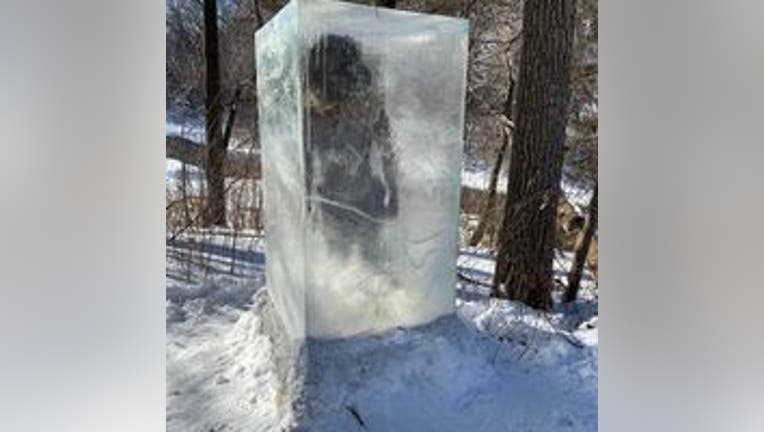 A sculpture of a caveman encased in plastic that looks like ice appeared along some trails in a Minneapolis park. (FOX 9)

MINNEAPOLIS (FOX 9) - The sight of a caveman seemingly frozen in time is bewildering and captivating trail goers in Theodore Wirth Park in Minneapolis.

The sculpture of the "Ice Man," which is encased in plastic that looks like frozen ice, recently appeared north of Bassett Creek between the "Conundrum" and "45 North" multi-use trails.

Zach Schumack is the artist behind the caveman, named "Zug Zug," which Schumack and a few friends placed by the paths on Thursday.

"I really like that it’s getting some attention because it’s getting people to get away from their TVs and computer screens," Schumack said.

This piece was originally made because Schumack’s friend was approached by an advertisement agency looking for an artist to make a piece for an advertising industry event hosted by local ad agency Hunter Adkins. The piece was on display for the night of the event. Since then, it’s been sitting in storage.

"Every day I would go to my garage and see this thing looking at me and it seemed like such a shame that this piece of art was just sitting there," Schumack said.

He wanted to do something with it so people could enjoy it. He and his friends had the idea of "pranking" the city of Minneapolis so they brought Zug Zug out to the park.

While the sculpture did not originally have proper approval by the park board to be placed in the park, the groups came to an agreement. Schumack says the sculpture will stay out on the trail until the snow melts.