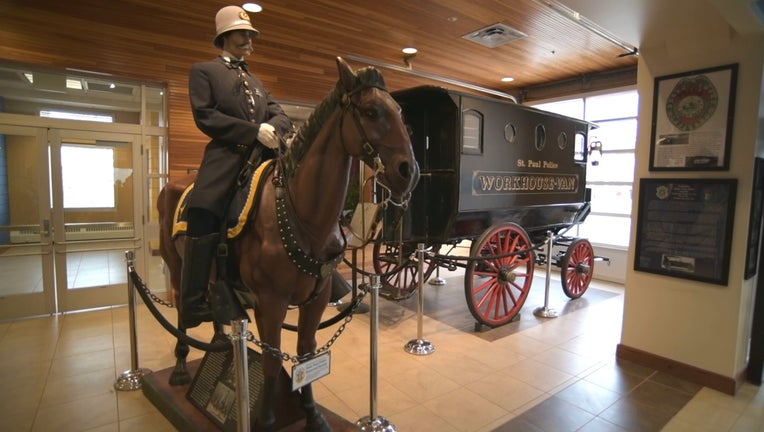 A mounted police officer and a real police wagon are among the items on display at the museum. (FOX 9)

ST. PAUL, Minn. (FOX 9) - The St. Paul Police Department is more than 160 years old, making it the oldest police organization in the state. Now, a group of mostly retired officers are keeping all that history alive.

Walk into the St. Paul Police Department's Western District and one of the first things you'll see is a display featuring a mannequin on a horse dressed in a police uniform from the late 1800s.

The St. Paul Police Department is more than 160 years old, making it the oldest police organization in the state. Now, a group of mostly retired officers are keeping all that history alive.

Then, there's an actual police wagon from 1897 that used to haul criminals to the St. Paul Jail. The display of motorcycle cop is next to an old fashioned traffic officer with the manual lamp they used to control traffic before electric street lights.

Most of the work on these exhibits, including one of a bicycle cop in front of the view down Wabasha Avenue at the beginning of the 20th century was done by retired forensic artist Paul Johnson.

"I like keeping history alive,” said Johnson. "People should see these things. It’s part of the history of the St. Paul Police Department." 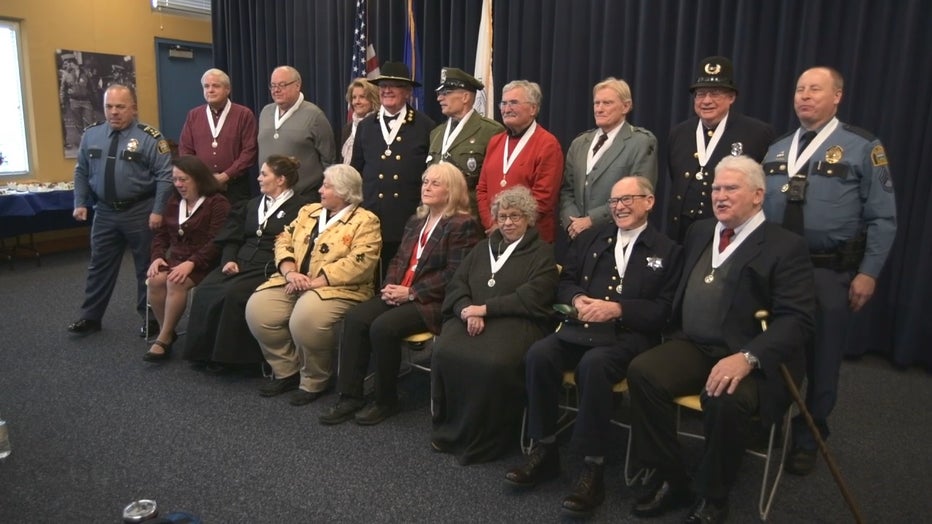 The St. Paul Police Department's Historical Society was honored with the Chief's Award for their efforts on preserving the department's history. (FOX 9)

He's one of 16 members of the St. Paul Police Department's Historical Society who were honored last week.

One by one the department employees, retired officers and civilian volunteers - some of whom were dressed in vintage police attire - joined Chief Todd Axtell at the podium to receive the Chief's Award.

"Who have really done an incredible job of preserving our past because when we preserve our past,” said Chief Axtell. “It allows us to be thoughtful about where we are heading. I want to thank you for that."

From manual traffic cops to riding on motorcycles, there's been quite the evolution at the St. Paul Police Department.

The Historical Society started back in 2006 to preserve and promote the history of policing in St. Paul.

"Our purpose is to try to not only collect police artifacts and memorabilia, but also pass on the history to younger police officers," said Fred Kaphingst, a retired officer.

They've collected thousands of items from the department's past, most of which are on display in a museum on the second floor of police headquarters. Everything from uniforms to manuals are on display.

Such items include a padlock from the first jail built in St. Paul in 1851 before Minnesota was officially a state. There’s also a piece of fabric from a chair in gangster John Dillinger's apartment when he was injured in a shootout with police. Old technology is featured, like the call box that police used to communicate with headquarters through a teletype machine before they had radios or cell phones.

"The officer if he had someone who was inebriated, he could handcuff the person around the post here and then he could simply send in the call box number 3-4-1,” said Ed Steenberg, a retired deputy chief. “That would go to a paper punch at a police station."

The Historical Society has also made displays about the world's first official school crossing program in 1921 and the nation's second K-9 unit in 1958.

"When I got on the police department, I thought this is the dumbest bunch of people I've ever seen,” said Larry McDonald, a retired deputy captain. “You got an auto theft and a person who stole the car would take off and we'd get out with flashlights and look around. I thought with a good dog I could find someone like that."

The group also created a Wall of Honor, which lists the name of every St. Paul police officer killed in the line of duty and constructed the memorial bell which is rung at the funeral of every fallen officer in the state.

"It’s satisfying to see how we operated before and we thought we were successful,” said McDonald. “Then, look at today how much more we can do."

In the end, the society hopes preserving the department's past will make for a brighter future.

"I think it’s important because what happens today is history tomorrow,” said Kaphingst. “As we look toward the future the tomorrow you have to remember from whence you came."

For more information about the Historical Society, click here.