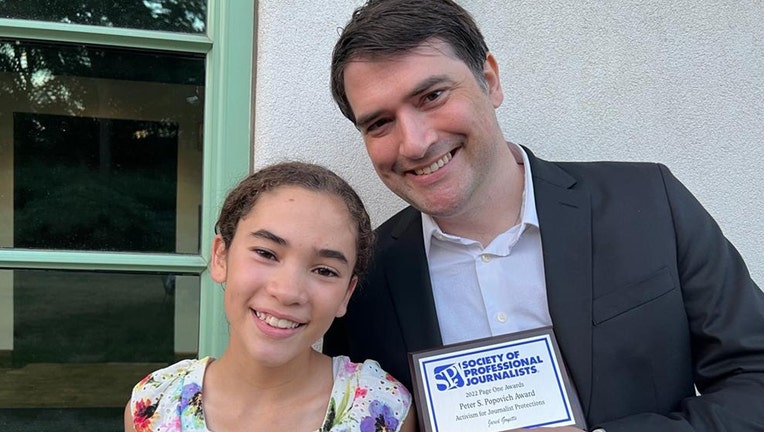 Jared Goyette with his daughter Ceci at the SPJ-MN award ceremony on Thursday, June 24.

MINNEAPOLIS (FOX 9) - Jared Goyette, a content editor and digital reporter at FOX 9, is the recipient of the 2022 Peter S. Popovich Award, the most prestigious award given by the Minnesota Society of Professional Journalists.

Goyette was honored following his time working as a freelance journalist, reporting for the Washington Post on the protests after the murder of George Floyd in Minneapolis on June 3, 2020. A police projectile hit him in the head, resulting in bruising and swelling to his nose and on the inside of his right eye, which could have resulted in him losing eyesight had he not gone to the doctor.

He became a lead plaintiff in the ACLU of Minnesota's lawsuit against the City of Minneapolis, the Minnesota State Patrol and the Minnesota Department of Public Safety. Goyette reached a settlement with the State Patrol, and part of his settlement included a permanent injunction that for six years bars state police from the following:

The lawsuit against Minneapolis is still ongoing.