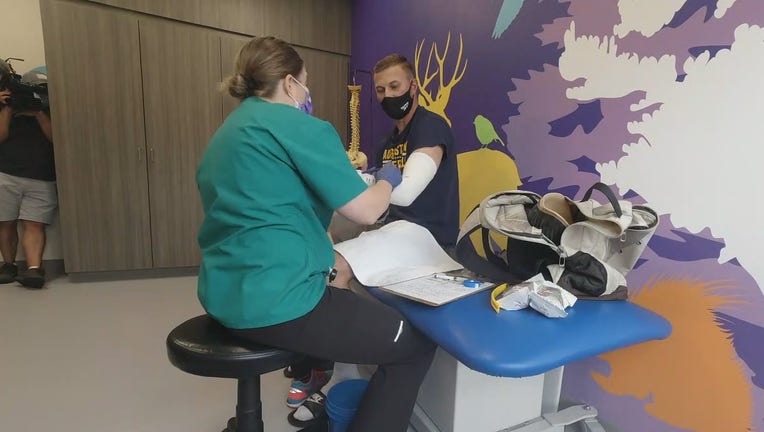 Parker Hanson gets fitted for a new prosthetic arm at Shriners Children's Hospital in Woodbury. (FOX 9)

WOODBURY, Minn. (FOX 9) - A former college baseball player from Hawley, Minnesota got fitted for a new prosthetic arm after a viral crowdfunding campaign provided him with enough donations to replace his stolen prosthetic.

Now, he’s looking to give back as well.

A former college baseball player from Hawley, Minnesota got fitted for a new prosthetic arm after a viral crowdfunding campaign provided him with enough donations to replace his stolen prosthetic.

Parker Hanson returned to Shriners Children’s Twin Cities location for the first time in years. Typically medical services stop at 21 years old, but at 24 and as a patient at the hospital since he was a kid, Shriners is making an exception.

Earlier this month Hanson shared home security video showing someone in Sioux Falls, South Dakota stealing his backpack, which contained his left prosthetic arm and attachments, from his car. The arm is critical for workouts for the right-handed recent Augustana University graduate who spent his college career pitching for the baseball team.

"They can steal someone’s very important piece of their life," said Hanson. "You don’t know what you are stealing when you first grab it."

Hanson’s story quickly went viral. His backpack was recovered, but the prosthetic and attachments were found damaged in nearby recycling facility. Within a day, fundraising for a new arm was well underway.

Now as he’s fitted for a free replacement, Hanson plans to donate the more than $10,000 raised back to Shriners and to the founder of NubAbility. The non-profit helps kids growing up with disabilities play and love sports.

"I’m getting a little emotional here," said Hanson. "When I mentioned him and told him, he said it’s going to pay for a lot of families and their expenses for the camps."

While Hanson is grateful for the outpouring of support he’s received, he’s also not surprised.

"Everyone on our staff here will do whatever we can for our patients, so being able to have a 24-year-old adult come back and see us an honor for us to still be able to be involved in his care," said Allyce Fisk, a Shriner's physician's assistant.

With his platform, Hanson hopes to inspire other young kids with disabilities that even life’s curve balls can be big wins.

"Just the fact I was able to turn a cruddy situation into something good, at the end of the day that’s the biggest message," said Hanson.

No one has been arrested for stealing Hanson’s backpack in the first place. More than anything Hanson says he just hopes they've learned their lesson.