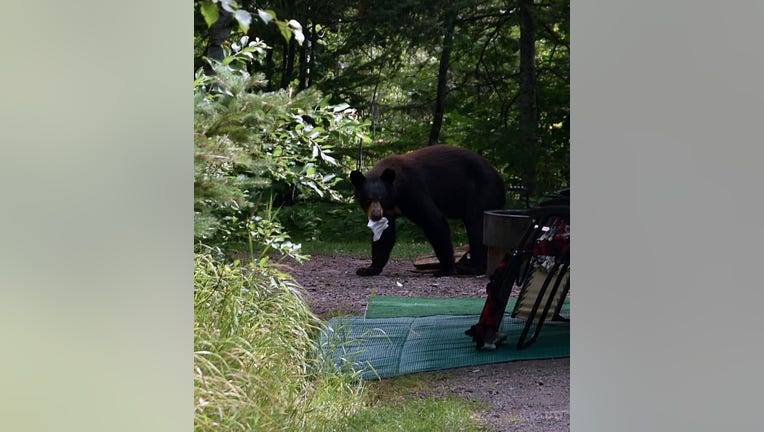 A Black Bear peruses a campsite at Tettegouche State Park at the beginning of August..

TWO HARBORS, Minn. (FOX 9) - A scarcity of natural food for bears has led to increased reports of them in towns on Minnesota’s North Shore this summer.

According to the Cook County Sheriff’s Office and the Two Harbors Area Wildlife Office, residents of and visitors to Minnesota’s North Shore should be vigilant to ensure these hungry bears do not get food in populated areas.

The Sheriff’s Office says the bear population is relatively low, around 12,00-15,000 compared to the 25,000 of the early 2000s. Therefore, the increase in sightings and encounters is not related to a population increase.

Instead, natural foods conditions are the worst in at least 10 years in the Arrowhead region, the Sheriff’s Office said.

“This food shortage, combined with abundant bear attractants like birdseed, dumpsters and unsecured trash has resulted in increased human-bear conflict,” the Sheriff’s Office said. “Food conditions inland are worse, which may drive bears to the North Shore where food conditions are better and people have fruit trees.”

Officials recommend locking up trash, birdseed and other attractants so bears cannot access them. Additionally, they recommend picking fruit from your trees and collect fallen fruit quickly.

The Sheriff’s Office says bear attacks are “extremely rare,” but it recommends using bear spray to drive bears away. Dogs should also be kept inside when possible to leave bears alone.

A high number of female bears have been killed this year in the bear hunt, leading to a number of orphaned cubs showing up in people’s yards. The Sheriff’s Office says letting them eat fruit from fruit trees will help them survive if homeowners can tolerate it.

Officials urged residents and visitors not to approach or take photos of the bears so they don’t become comfortable around people.

If you have any questions or need to report a bear, call the DNR’s Area Wildlife Office at 218-834-1453 or email twoharbors.wildlife@state.mn.us.