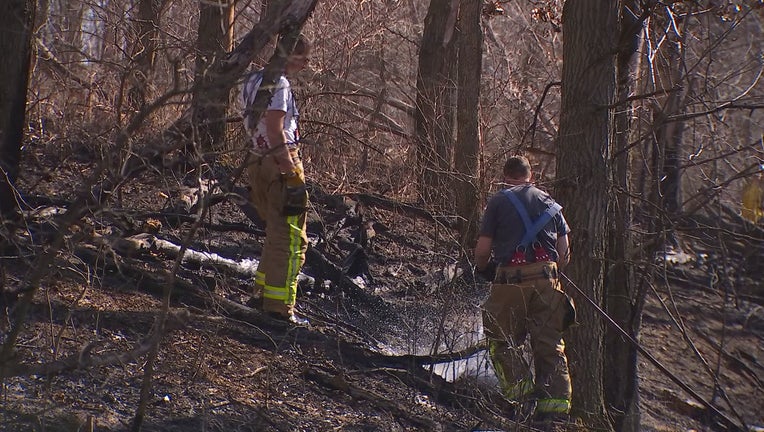 Fire crews put out the last embers of a brush fire that burned Saturday afternoon in Elk River, Minnesota. (FOX 9)

(FOX 9) - Recent dry conditions in Minnesota have created a dangerous recipe for brush fires this week.

Most of the state is at high risk for fires, according to the Minnesota Department of Natural Resources' Fire Danger map, while open burn restrictions are in place for some areas, including parts of the metro. However, a Red Flag warning that was in effect on Friday has expired as winds calmed on Saturday.

Firefighters across Minnesota have dealt with grass and brush fires in recent days, as dry conditions have created a dangerous recipe for wildfires...

But Saturday afternoon, firefighters in Elk River were out battling a brush fire that broke out in the area of Elk Lake Road NW and Ranch Road NW. Jim Hallgren was enjoying the calmer breezes of this Saturday, doing yard work at his home in Elk River when he heard sirens headed his way.

"Then down below, you can see all this smoke and I thought what the heck is going on here," said Hallgren.

The hazy smoke soon gave way to flames they could see headed towards their house.

"I was thinking about that, I even hooked my hoses up just in case, you know," he said.

Even with mild wind, moving about 10 to 15 miles an hour, the fire behind his house and his neighbors spread quickly.

Fire crews got this out in a couple of hours but know if it had been anything like the winds on Friday, it could have been bad. The suspected source of the flames was a backyard fire that hadn’t been fully put out.

"Probably just a couple embers that got pushed up by the wind, landed out in the field out here and ended up burning off ten acres of land," said Deputy Chief Libor.

Not far away in Ramsey, crews battled a much larger fire that burned overnight, pushed by winds that were still fairly gusty.

Further south, firefighters were out in Richfield as well, knocking down a brush fire at Veterans Park. First reported around 9 p.m., it took crews until 2 a.m. to fully put out the fire that burned about four acres, contained to the park's marshy areas. None of the park’s bridges or buildings were affected and the cause of that fire is so far unknown.

"Especially this time of year, when it’s this dry, I’d say don’t burn anything at all," said Deputy Chief. "It’s putting everyone around you at risk."

Back in Elk River, this was actually their second grass fire of the day. The other was also started by a backyard burn. Luckily, the wind, in these cases, wasn’t as bad.

"But those couple, three days with the wind like that, yeah, it would have been out of control," concluded Deputy Chief Libor.